Trait no longer the domain only of plants 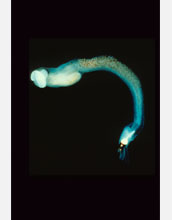 Bacteria in a shipworm allow it to manufacture food from the nitrogen content in air.

Only plants can take nitrogen gas from the air and use it to make the protein they need to grow.  Or so biologists thought.

Now, scientists at Ocean Genome Legacy in Ipswich, Mass., and their colleagues at Harvard Medical School have shown that animals, too, can convert air into food.  The National Science Foundation (NSF) funded their research.

The animals are marine clams called shipworms.  They burrow into and eat wood, causing more than a billion dollars in damage to ships and piers each year.

"Wood has very little nutritional value," said biologist Dan Distel, executive director of Ocean Genome Legacy.  "It contains almost no protein.  But these clams use bacterial symbionts living inside a special organ in their gills to convert dissolved air [which is about 80 percent nitrogen] into the protein they need."

The discovery reveals a new way for animals to feed and suggests that other animals in the sea and elsewhere may be able to survive with only air as a source of protein.

Understanding how these clams make use of this process is also helping researchers gain insight into how plants fix nitrogen, responsible for a large percentage of the protein made by plants and ultimately eaten by livestock and humans, said Distel and colleagues Claude Lechene and Gregory McMahon of Harvard Medical School and Yvette Luyten of Ocean Genome Legacy.

Bacteria and archaea responsible for biological nitrogen fixation can be found in free-living form or in symbiosis with algae, higher plants and some animals.  Although these microbes are a critical part of the global nitrogen cycle, "there has previously been no means to evaluate this fixation process at a subcellular resolution," said Lechene.  "This is now possible with MIMS."

Wood and woody plant materials are abundant in the biosphere and are important carbon sources for fungi and microorganisms.  But few animals are able to feed primarily on wood.

Although rich in carbon, said Distel, wood contains two orders of magnitude less nitrogen per unit of carbon than does animal tissue.  Animals using wood as food must therefore obtain other sources of combined nitrogen for biosynthesis.  Wood-eating termites, for example, supplement their diet with nitrogenous compounds produced by nitrogen-fixing bacteria in their gut.

Along came shipworms, able to do the same thing.

"Although conspicuous communities of nitrogen-fixing bacteria have not been found in the guts of shipworms," said Distel, "dense populations of intracellular symbionts have been observed in cells in shipworm gills."  A bacterium capable of fixing nitrogen gas has been isolated from the gills of shipworms.

Distel, Lechene and co-workers localized and measured nitrogen fixation by individual cells of the bacteria using MIMS to measure the incorporation of nitrogen gas enriched in the rare stable isotope 15N.  "MIMS technology has allowed us to localize, quantify and compare nitrogen fixation in single cells and subcellular structures," said Distel.

Indeed, it turns out, animals--or at least this clam--can make food from thin air.