A Season at the Penguin Ranch in Antarctica 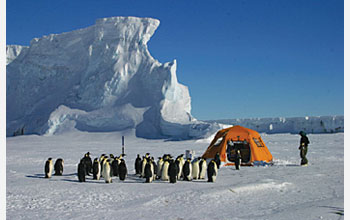 Paul Ponganis is an Antarctic veteran who has studied emperor penguins in the field for more than 20 years. He is both a medical doctor (anesthesiologist) and marine biologist, and he has combined these fields to pursue a lifelong fascination: oxygen regulation in mammals and birds.

Ponganis believes that by studying emperor penguin physiology, he can help doctors better understand hypoxia in human patients. He has devoted years of extensive research, both in Antarctica and at Scripps Institution of Oceanography at the University of California-San Diego, located in La Jolla, Calif., to the investigation of diving physiology and behavior. Together with his Scripps colleague, Jerry Kooyman, and others, and supported in part by the National Science Foundation, Ponganis has made pioneering discoveries from his work with the sea birds. A feature story about this work appears here.

Ponganis explained his research to LiveScience and shared short excerpts from his recent research diary in Antarctica.

Paul Ponganis
Why do we study penguins? We want to understand how emperor penguins dive and feed in the hostile conditions of Antarctica. We are studying, for example, how these tough birds manage to stay underwater for almost 30 minutes at a time, longer than any other bird, and dive over 1,500 feet (457 meters) deep down into frigid waters. We study penguins at our field camp, called "Penguin Ranch," which is located about 15 miles (24 kilometers) out on the windy, frozen McMurdo Sound near McMurdo Station, a U.S. base in Antarctica.

During each winter study season, we temporarily restrict a group of adult or sub-adult penguins within a large, fenced area. In this area, we have drilled holes through the ice that the penguins use for diving and hunting. Because there are no cracks or other holes in the ice in this area besides those we maintain, the penguins keep returning to our dive holes to dive and fish. This setup allows the birds to dive freely, but ensures that they stay in our study area.

Some of the penguins we study are wearing miniature recorders, called "time and depth recorders" (TDRs), which record how long and deep the birds dive. (The TDRs don't harm the penguins or interfere with their swimming patterns.)

The information provided by the TDRs, together with our own observations, is helping us better understand the diving and feeding behavior of penguins and the environmental conditions they confront. At the end of each study season, we remove the recorders and release the penguins.

Excerpts:
Journal - Week 1
The experiments are going well. Our new TDRs are giving us better data than our old ones. And I can now see that our feathered people are coming up several times to the underside of the ice layer. Whatever they are doing, they must be eating a lot, because after diving for several hours, their stomachs look very, very full. The large amount of guano (excrement) they produce also indicates that the pickings are good.

Journal - Week 2
Some of the birds are very smart. They have learned that the corks we put over the dive holes at night to stop the holes from freezing shut also prevent them from diving in the morning. At least one bird climbs on the cork each morning and complains about this to any person who happens to pass by. The other day, one of the birds grabbed one of the handles on a cork and tried to drag it off the dive hole. They've got the system down very well.

Journal - Week 3
The penguins seem totally unfazed by the cold and wind, unlike this wimpy human being. When the temperatures really drop and the wind picks up, the birds huddle together to form a sort of "scrum." You can see heat waves coming from the scrum. The birds take turns on who gets to be in the center. It's very democratic.

Most of the time, however, the penguins sleep with their heads tucked under their wings or lie down in the soft snow, which is far warmer than the sea ice and serves as an excellent insulator.

Every day, we build a snow wall for the penguins, which serves as a wind shield, and we add a layer of new, clean snow near the wall for them to sleep on. Unfortunately though, the penguins love to eat snow, so the snow blocks need constant renewal, no matter how large we cut them. And maintaining the area near the wall is like mucking out a horse's stall.

Journal - Week 4
The experiments continue to go well. These birds constantly amaze me by their seeming indifference to the weather. It can be -40 degrees (with the wind-chill) and they still want to go diving. I can't imagine jumping into -2 degrees Celsius ocean water and then coming up to the surface where the temperatures are often well below freezing. They all must be very successful in their foraging since they look as if they are gaining weight.

Journal - Week 5
Earlier this week, we were smacked with an enormous snowstorm--storm gusts reached 60 miles (96 kilometers) per hour. Every time I tried to lift my leg to step forward, the wind blew me off balance. I finally had to half crawl in order to make any forward progress. I never thought I would hear my wife, who is here with me, actually say that she wished she weighed more (so that it would be harder for the wind to blow her over)!

Because of the storm, we were essentially trapped in our huts for two days, going outside only to check on the penguins. Comfortably sleeping in the snow, the penguins seemed to be completely indifferent to the howling winds.

Journal - Week 6
Our TDRs have revealed two diving behaviors that we haven't recorded before: 1) the birds are staying down longer than usual on their dives; and 2) they are repeatedly coming up under the ice sheet without breaking to the surface to take a breath. Because our TDRs don't allow us to directly see the penguins during their dives, we can't yet explain this strange diving behavior.

Journal - Week 7
Greg Marshall from the National Geographic Society arrived with his Crittercam® video camera. This device can be attached, like a small backpack, to a penguin's back, and then captures video from the penguin's perspective as the bird swims and dives. The Crittercam thereby allows a bird to make (and star in) its own underwater movie. Crittercam brings success! It showed us that Rodney, our first penguin to sport a Crittercam, was catching many, many, many fish in the plate ice that lines the bottom of the sea ice. It also showed us that the birds are catching a small fish, the Bald notothen (Pagothenia borchgrevinki), on their dives. This finally explains why the birds are taking long dives and spending a lot of time near the underside of the sea ice.

Journal - Week 8
Summer is coming to the Antarctic. The sea ice is starting to thin, so it's time to drag our huts back to the solid ground. We are breaking up camp and now come to the hardest part. We have to say good-bye to our penguins. As they head back to the ice edge, I hope that they have long and happy lives.