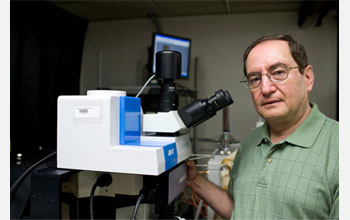 For most, catalysis is not a household word. But this process--a way to speed up a chemical reaction using a "helper" material that survives largely unscathed--is a major driving force for everything from the petroleum and chemical industries to the understanding of environmental science or the inner workings of our cells.

"Chances are that most of the manufactured goods that you are in contact with right now contain some form of synthetic fiber--your clothes, the shoes on your feet and the carpet just below them," says Israel Wachs, a professor of chemical engineering at Lehigh University in Bethlehem, Pa. "It's likely that all of them have been touched in some manner by catalysis."

Close to 20 percent of the United States' Gross National Product (GNP) involves a product going through a catalytic processing step, according to some estimates.

And yet, when Wachs ran the initial experiments that convinced him to study catalysis at the nanometer (billionths of a meter) scale, he was diving into uncharted waters.

"There were no rules established when we first got into this," recalls Wachs, "no guidelines to follow. It was like not knowing which direction was up, down, left or right."

Wachs is a recognized leader in the study of catalysis. His work has been cited in scientific literature more than 10,000 times throughout his career, thus far. A serious and intense researcher, he is not the kind of person to latch on to the latest fads.

During the 1990s, Wachs became aware, as did many scientists, of the growing buzz around the notion of nanotechnology. At the time, he was skeptical, figuring that 'nano' might simply be the latest trend in the popular-scientific press, the type of thing that would inevitably blow over.

Despite his misgivings, he decided to run a few basic experiments to seek potential nano-applications in the realm of catalysis. The results of these experiments convinced him that 'nano,' in his field, was more than just hype.

These days, Wachs is advancing the science of nanocatalysis with help from a National Science Foundation (NSF) Nanoscale Interdisciplinary Research Team (NIRT) grant that brings him together with collaborators from Lehigh University, Rice University and the University of Virginia. The research has the potential to reduce pollution and impact the environment in a variety of ways.

"Nanotechnology deals with the manipulation of materials of incredibly small dimensions," says Wachs. "At this scale, materials have unique chemical and physical properties not found in their larger counterparts, especially at one nanometer or less."

To give a sense of the scale involved, imagine a strand of human hair. Now, imagine that same hair sliced lengthwise into 80,000 equal parts. The width of one of those slices would be about 1 nanometer.

Wachs maintains a unique research laboratory, the only one of its kind in the United States, which uses a method called "operando molecular spectroscopy." Operando is Latin, meaning operating. Operando spectroscopy allows for molecular-level monitoring of catalysts under realistic conditions that can be studied simultaneously online as catalysis occurs. Wachs has had many breakthroughs, even finding that the use of nanoparticles would actually be counterproductive for some catalytic reactions.

For example, nitrogen oxide (NOX) is a pollutant created in automobiles, at many electric power plants and at other sources. It contributes to a host of problems, from the production of ozone (a greenhouse gas and ground-level pollutant) to acid rain. Wachs and his colleagues are currently trying to develop a nanocatalyst that converts NOX into the benign nitrogen and water.

This is not the first time, however, that Wachs has used his expertise in catalysis to positively impact major environmental issues. One of his three dozen patents is for a traditional catalytic process that converts methanol, a byproduct pollutant of paper mills, into formaldehyde that the mills can then use to make resins for particle board. The pulp mills once released the methanol, along with other harmful chemicals into rivers and streams, resulting in environmental havoc. For the beleaguered paper industry, this, in essence, is the transformation of pollution into profits. In 2002, Wachs received the Clean Air Excellence Award from the Environmental Protection Agency (EPA) for his pioneering work in this area.