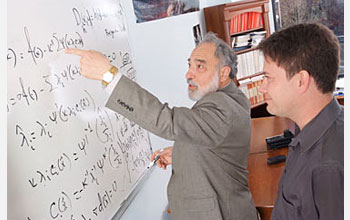 Dr. Roman Polyak is a fortunate man. In mathematics, his area of research, few get to see their discoveries translated into actual applications during their lifetime.

Yet, more than two decades after he first developed his theory and published it, Polyak watched a conference presentation that showed how his mathematics had translated into a device to help treat cancer.

"In the presentation, they showed a photo of a boy," said Polyak, smiling as he recalled the image of a young patient helped by this new technology. "I was in heaven. I never dreamed, 25 years ago, that rather abstract mathematics could be used for cancer treatment."

Polyak, who holds a joint appointment in operations research and mathematical sciences at George Mason University, works in the field of mathematical optimization. Optimization, as the name implies, involves making something as effective as possible.

"People have been working on optimization since the ancient Greeks learned that a string encloses the most area when it is formed into the shape of a circle," he said.

Nearly 25 years ago, Polyak developed a theory called nonlinear rescaling (NR) for solving constrained optimization problems. The methods are essential for solving complicated, real-world technological problems with thousands of variables and tens of thousands of constraints.

Polyak's NR concept has been adapted and modified by others, notably German researchers Rembert Reemtsen and Markus Alber, who recently used it to improve the efficiency of radiation treatment for cancerous tumors. The treatment uses optimization to determine angle, intensity and duration for radiation beams to most effectively destroy cancerous tumors without damaging nearby healthy tissue. Software fundamentally based on NR has since been built into radiotherapy systems used in some hospitals.

"You can do beautiful theory, but the real question is, 'Is it robust?,'" asked Polyak. His method enables calculations with up to ten digits of accuracy, critical not just for treating cancer, but also many uses beyond medicine. In structural optimization, the method solves extremely large design problems with up to 5,000 variables and 200,000 constraints. Image processing, medical diagnostics and finding the optimal distribution of power across a grid have been just a few of the applications.

But, success hasn't come easily or quickly for Polyak, and the circumstances under which he accomplished much of his most creative thinking were less than desirable. In 1980, he was fired from his job in his native Kiev, Ukraine, because of his desire to emigrate from what was then part of the Soviet Union.

As a "refusenik," he was forced to support his family of eight using a compilation of odd jobs involving mathematics, including tutoring and mentoring people working on their dissertations. For almost a decade, he was isolated not only from his colleagues abroad, but also, to a large extent, from his colleagues within the Soviet Union.

It was impossible for him to publish research in the Soviet Union, or even to submit papers for publication overseas. Despite these difficulties, he continued his work and obtained, as it become evident years later, very important results.

During the dark times, Polyak says it was his family, a few friends and mathematics that sustained him. "If I couldn't do my mathematics, I would be spiritually dead," he said, and he means it.

Fortunately, before losing his Kiev position, he had published several papers. Translated into English, the work was becoming known in the West. This drew attention to his situation, and with the help of colleagues abroad, Polyak smuggled his seminal Modified Barrier Function (MBF) paper out of the country.

When Polyak finally immigrated to the United States in the late 1980s (it wasn't until former Soviet President Mikhail Gorbachev took office that the mathematician could finally leave), the colleagues in the West were instrumental in helping him secure a position in the mathematical sciences department at the IBM T.J. Watson Research Center.

It was at IBM that his ideas were tested in the early 1990s, and his paper, "Modified Barrier Functions (Theory and Methods)," was published in 1992 in Mathematical Programming, the leading journal in optimization.

Polyak has continued to refine his theories -- the National Science Foundation has supported his research since the 1990s -- and the NR approach has become the foundation for the exterior point methods in constrained optimization. In 2006, he and his former graduate student Igor Griva, also from Kiev and now an assistant professor at George Mason, published in Mathematical Programming a paper that outlined their new NR-based Exterior Point Method for achieving faster and more accurate solutions to large-scale constrained optimization problems. Last year, the pair earned a U.S. patent for the mathematical tools.

Griva first met Polyak while visiting graduate schools in the United States. Instead of trying to sell him on the university, Polyak told Griva about projects that he could tackle if he came to George Mason. Griva was hooked, and the two are still working together. "He sees connections in places where others don't," says Griva, who called Polyak inspiring. "He is one of the most talented teachers I've had and a brilliant mathematician."

Currently, Polyak is working on a book in which he plans to summarize NR results for the last quarter of a century. "It makes me very happy that my mathematical findings have been used for such important applications. With mathematics, when it develops, you have a tool that can be applied in any field."

Read the full story at /news/longurl.cfm?id=44.