Graduate student Ellen Currano provides a glimpse of paleontological fieldwork, describing how she collects fossil leaves for research studying the effects of climate change on plants and insect herbivores 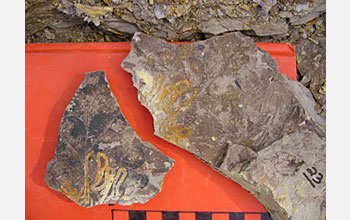 An insect mine on a 53 million-year-old fossil from Wyoming's Bighorn Basin.

Around 6:30 a.m., the sun rises above the butte to the east of my camp, and its light and heat signal the start to another day of paleontological fieldwork in the Bighorn Basin in Wyoming. I move my cot and sleeping bag back into my tent, pull on my field clothes and head over to the kitchen area for breakfast, calling out a "good-morning" to Eriks, my field assistant.

Within an hour, we pull out of camp in Sunshine, the bright yellow SUV I've rented for the summer. A short but bumpy ride later, we're at our fossil site. We have already spent a week prospecting for a good site and digging a quarry, and our goal is to count 1,000 fossil leaves from this site.

We pull blocks of rock out of the quarry using hammers, chisels and pick-axes, and then split the blocks to find leaves. Leaves become fossils when they are rapidly buried by fine-grained mud. The mud hardens to rock, and the leaf decays, leaving both its impression and a small gap in the rock. When we hit the rock with a hammer, the rock preferentially splits along the leaf fossil because of that gap.

I identify what plant species each leaf belongs to and what types of insect damage it has. Eriks records the data in my notebook and carefully wraps the "keeper" specimens in toilet paper to be shipped to the Smithsonian Institution in Washington, D.C., where I will carefully check my field identifications using a microscope and reference collections. On a good day, we can count 100 leaf fossils before heading back to camp for dinner, a moderately cool beer and another night sleeping under the stars.

I first visited the Bighorn Basin the summer after my junior year in college as a Smithsonian intern, and I fell in love with its desert scenery and abundant leaf fossils. This summer is my fourth and final field season in the Bighorn Basin collecting fossils for my doctoral thesis. I will use these fossils to study the effects of climate change on plant communities and their insect herbivores.

Insect damage is visible on well-preserved fossil leaves. For example, after an insect chews a hole in the leaf, the tissue around the damage toughens, essentially forming a scab around the damaged area. This is visible on fossils as a darkened rim around the hole. By collecting fossils from times that have different temperatures, I can look at how climate changes affect insect herbivores feeding in natural ecosystems.

The fossils I study range in age from 52 to 60 million years old. During this time, several significant temperature fluctuations occurred. One event that is particularly relevant to modern global warming is the Paleocene-Eocene Thermal Maximum (PETM), a rapid warming of 5-10 degrees Celsius that was caused by the release of at least 4,000 gigatons of carbon into the Earth's atmosphere over a period of less than 10,000 years.

Insect damage on leaves from the PETM is very high, and we attribute the increase to the elevated temperature and increased carbon dioxide (CO2) in the atmosphere. This summer, I am targeting fossil sites from a cool interval to determine whether there is a decrease in insect damage, as I would expect, given the PETM results. By late spring, when I will defend my thesis at Penn State, I should have an answer.