Biophysicist Helen Greenwood Hansma of the University of California, Santa Barbara, on the origin of her new hypothesis for the origins of life 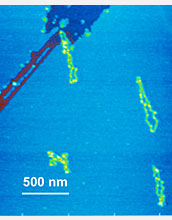 I have a passion for mica. This passion led me--in my 62nd year and almost a grandmother--to develop a hypothesis for the origins of life.

"Develop a hypothesis" is what I've been doing in the last many months, but the original inspiration came when I had not a scientific thought in my head. I was bent over the dissecting microscope in my apartment in Virginia, near the National Science Foundation, splitting mica into thin sheets to arrange around some crystals grown from a Smithsonian crystal-growing kit. As I looked at the bits of green algae and brown crud at the edges of the mica sheets, I thought, "This would be a good place for life to originate!"

My hypothesis is that life originated between thin sheets of mica rocks, which provided many separate spaces for prebiotic molecules to evolve, sometimes in isolation from each other and sometimes in association with each other, as they oozed around within and between sheets. The energy needed for life to evolve from non-living molecules might have come simply from the sun and the waves.

The mica hypothesis says that life developed as a 'sandwich filling' in mica 'sandwiches' in the prebiotic 'soup,' or, as 'life between the sheets.' This contrasts with the 'pizza,' clay and vesicle hypotheses in which life originated on the surfaces of earth's mineral crust, in clay particles or in lipid vesicles. There are also 'RNA World' and 'Metabolism First' hypotheses. My hypothesis says that RNA and proteins and metabolic chemistries could all have evolved between the mica sheets and then combined and emerged, coated with lipid membranes, as primitive cells.

My passion for mica came from my research in biological atomic force microscopy, for almost 20 years now, starting soon after the atomic force microscope (AFM) was invented in 1986. The AFM feels a surface by raster-scanning a tiny tip across the surface with a sensitivity so fine, that it can feel even bare DNA molecules on a flat surface. The flat surface we use is mica, a layered mineral with atomically flat sheets that can be peeled off with adhesive tape to expose a clean surface.

Maybe you are now asking, "How can you see bare DNA molecules on the mica when you said there was algae and crud on it?" The mica we use for AFM samples is high-grade mica, free of bubbles and other defects. The mica that inspired my hypothesis for the origins of life came from an abandoned mica mine in a Connecticut state park, where my brother, Jim, had taken some of us for a hike the previous summer. That mica had lots of bubbles and defects.

Why do I call my idea a 'hypothesis'? People use words in many ways, but one of the strengths of science is that it tries to use words in precisely defined ways. Theories are much stronger than hypotheses. A hypothesis is a starting point in the scientific method, while a theory is the result of much research and testing. Once there were also scientific laws, but now we know that even Newton's Laws are not totally correct. Therefore, newer scientists such as Charles Darwin call their well-tested ideas 'theories' instead of 'laws.' My idea is only a hypothesis, ready for testing--by me and hopefully by many others in the scientific community.

How Discoveries are Made

Dan Koshland, a famous biochemist, wrote that there are three ways discoveries are made: charge, challenge or chance. He calls this the 'Cha-Cha-Cha Theory of Scientific Discovery.' Louis Pasteur said that chance favors the prepared mind. I think mine was a 'chance' discovery, made by a mind prepared by decades of diverse education and research in biochemistry, chemistry, cell biology, biophysics, nanoscience and materials science. Koshland, and Einstein before him, said that the process of discovery seems to be the same in science and in other areas. Therefore, we are all making discoveries in the same ways, whatever our areas of knowledge.

Discoveries range from small to earth-shaking. I wonder which kind the mica hypothesis will be: a big one that gets into textbooks some day or a small one that falls into oblivion. I'll get some clues about this when I attend the Origin-of-Life Gordon Research Conference and share my hypothesis with people who have worked in the field for years or decades.

Related Websites
LiveScience.com: Behind the Scenes: Granny Says Life Evolved Between the Mica Sheets: http://www.livescience.com/4855-granny-life-evolved-mica-sheets.html
Did Life Originate in a Mica Sandwich Sitting in Primordial Soup?: http://www.nsf.gov/news/news_summ.jsp?cntn_id=110802
"Got Mica?" -- The Discovery Files: https://www.nsf.gov/news/mmg/mmg_disp.jsp?med_id=61897