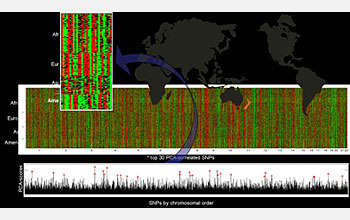 Imagine being adopted, with no understanding of your cultural or genetic background. You don't know your heritage or what diseases you are genetically predisposed to. Most of us have some idea about the roots of our family tree, but little understanding of what those lower branches mean in terms of our predisposition to a host of diseases and ailments.

Now, a group of computer scientists, mathematicians and biologists from around the world have developed a computer algorithm that can quickly trace an individual's genetic ancestry with only a small sample of their DNA. In fact, the program can trace the genetic ancestry of thousands of individuals in minutes, without any prior knowledge of their background.

The multi-disciplinary approach, published in the September 2007 edition of the journal PLoS Genetics, allowed the research team to address this type of research in a novel way. Unlike previous computer programs that required prior knowledge of an individual's ancestry and background, the new algorithm looks for specific DNA markers known as single nucleotide polymorphisms, or SNPs (pronounced snips), and needs nothing more than a DNA sample in the form of a simple cheek swab.

The researchers used genetic data from previous studies to perform and confirm their research, including the new HapMap database, which is being developed by an international partnership of scientists and others to uncover and map variations in the human genome.

This recent "work was an exciting opportunity to form an interdisciplinary team of computer scientists, mathematicians and human geneticists," said Petros Drineas, the senior author of the study and assistant professor of computer science at Rensselaer Polytechnic Institute.

"Now that we have found that the program works well, we hope to implement it on a much larger scale, using hundreds of thousands of SNPs and thousands of individuals," said Drineas, who was funded by a National Science Foundation (NSF) Faculty Early Career Development Program (CAREER) award. The teams' program "will be a valuable tool for understanding our genetic ancestry and targeting drugs and other medical treatments because it might be possible that these can affect people of different ancestry in very different ways."

Understanding our unique genetic makeup is a crucial step to unraveling the genetic basis for complex diseases. Although the human genome is 99 percent the same from human to human, it is that one percent that can have a major impact on our response to diseases, viruses, medications and toxins. If researchers can uncover the minute genetic details that set each of us apart, biomedical research and treatments can be better customized for each individual, Drineas said.

This program will help people understand their unique backgrounds, and aid historians and anthropologists in their studies of where different populations originated and how humans became such a hugely diverse, global society.

The program was more than 99 percent accurate in trials and correctly identified the ancestry of hundreds of individuals. This included people from genetically similar populations (such as Chinese and Japanese) and complex genetic populations, like Puerto Ricans who can come from a variety of backgrounds including Native American, European and African ancestries.

"When we compared our findings to the existing datasets, only one individual was incorrectly identified and his background was almost equally close between Chinese and Japanese," Drineas said. He went on to explain that the results are preliminary, but extremely promising. The team is now working to test its program on a much larger data set.