Microbes to People: Without Us, You're Nothing!

How tiny microbes run the world 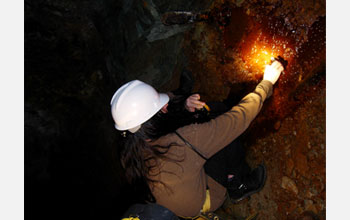 A researcher collects a sample for microbial analysis.

Nowhere is the principle of "strength in numbers" more apparent than in the collective power of microbes, which include bacteria, viruses, some fungi and some animals that can only be seen with microscopes.

Although each microbe is but an almost weightless one-celled organism, the collective weight of Earth's 5 million-trillion-trillion microbes accounts for most of the planet's biomass--the total weight of all living things. Even the total number of stars in the universe (7 thousand-billion-billion) pales in comparison to the number of microbes on Earth.

With their mighty collective muscle, microbes control every ecological process, from the decay of dead plants and animals to the production of oxygen. Therefore, it is fair to say that in important ways, microbes literally run the world.

No corner of Earth escapes the influence of microbes, the oldest living organisms on Earth. Since microbes first appeared 3.5 billion years ago, about one billion years after Earth formed, they have diversified enough to colonize every ecosystem, from scalding vents at the bottom of the ocean to burning desert sands to polar ice.

Microbes are in the food we eat, the air we breathe and the water we drink. Each liter of sea water contains up to a billion bacteria.

Microbes even inhabit the human body. In fact, every person has more than 10 times as many microbes living on and inside their body as human cells. Although most frequently associated with disease, our microbial hitchhikers help us much more than they harm us. How? By controlling many of the biological processes that are essential to our survival, including the maintenance of our skin and the digestion of our food. Each person's digestive track alone harbors about three pounds of bacteria.

"If all of Earth's microbes died, so would everything else, including us," says Matt Kane of the National Science Foundation. "But if everything else died, microbes would do just fine." Therefore, Kane concludes that "we need microbes more than they need us."

Despite the importance of microbes, scientists have only been able to study less than one percent of the estimated millions of microbial species that live on Earth. Why so few? Because microbes have strict nutritional requirements and interact with one another in complex ways that currently make it impossible to grow the overwhelming majority of them in the laboratory.