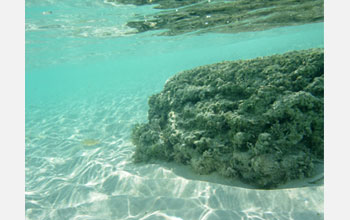 A type of microbial community known as a thrombolite.

Long before the people, plants or animals of a community detect brewing ecological threats--such as increasing pollution or harmful algae blooms--one type of resident invariably warns of impending problems: microbes, the simplest but most sensitive members of every community.

If microbes are so sensitive, why haven't they been incorporated into early warning systems that could, for example, tip off aquaculture managers to the presence of disease-causing organisms before their investments go belly up or flag marine environments that are stressed by climate change? Because warnings from microbes come not as megaphoned evacuation shouts but as subtle but telltale adjustments in the growth rates, sizes and compositions of microbial communities. The types of technology that would enable scientists to track such responses in such tiny organisms has traditionally not been available.

But a recent study, led by Elizabeth Dinsdale, Rob Edwards and Forest Rohwer of San Diego State University and published in Nature, provides data that will significantly advance efforts to identify and interpret microbial warnings of ecological changes. These data inventory all of the functions that microbes are genetically programmed to conduct in many types of ecosystems, ranging from coral reefs to deep mines.

Although it has long been known that microbes play important and unique roles in every type of ecosystem, "this study represents the first definitive inventory of microbial functions across so many different ecosystems," said Edwards.

According to the study, each type of ecosystem has its own microbial DNA profile that is as unique as a signature or a fingerprint. The uniqueness of each ecosystem's profile reflects the fact that in order to stay healthy, each ecosystem needs a particular suite of microbes that perform specific jobs. For example, a coral reef needs certain microbes to fight diseases common to tropical marine environments. These microbes are different from those needed by a lake to fight diseases common to fresh water environments.

Without its unique, beneficial microbes, an ecosystem can be overrun by harmful microbes and therefore decline. For example, catalogues developed by the researchers of the microbial DNA of a dying coral reef in the Pacific Ocean and a contaminated fresh water pond in San Diego differed significantly from those of their healthy counterparts. The study thereby showed that microbes of stressed ecosystems change in measureable and predictable ways.

The microbial DNA of ecosystems had not previously been characterized because more than 99 percent of microbes cannot be grown and studied in laboratories. But rather than conducting laboratory studies of individual strains of microbes, the researchers developed their microbial DNA inventories by applying the new science of metagenomics--which is used to analyze the DNA composition of microbial communities en masse.

The development of metagenomics enables scientists to quickly assess microbial responses, Rohwer said. In addition, because metagenomic studies are used to sample microbial communities in their natural habitats, "they get about as far away from a Petri dish as you can get," added Dinsdale.

Scientists look forward to eventually incorporating microbial monitoring into large scale environmental sensing networks. But before they can do so, additional insights into microbial signaling are needed and new technology supporting real time monitoring of various environments must be developed.