The Freaky Fishes of the Congo 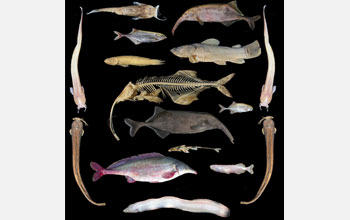 The lower Congo River is home to a species-rich assemblage of fishes.

In the classic novella Heart of Darkness, Joseph Conrad's protagonist, Marlow, describes the Congo River as an immense snake "... uncoiled, with its head in the sea, its body at rest curving afar over a vast country, and its tail lost in the depths of the land." The description, while wonderfully evocative, is also a bit menacing. I am happy to report that my own experiences conducting research in the Congo have been neither so menacing nor so dark.

On the contrary. For the past three years, I have--with support from the National Science Foundation (NSF) and a team of U.S. and Congolese students and colleagues--been exploring and documenting the fish biodiversity of the lower Congo River, which is the head and neck of Conrad's imaginary snake.

What we have found there is an extraordinarily beautiful place that is redolent in history and new discoveries, and amazingly rich in aquatic biodiversity.

The Congo River is a place of superlatives--it is the world's second largest river basin, draining an area the size of Europe. It is so immense that its source waters in the highlands of east Africa take more than six months to exit into the Atlantic Ocean, some 2,900 miles (4,670 kilometers) to the west. The river and its tributaries represent over 9,000 miles (14,500 kilometers) of navigable passage across central Africa, and provide food and livelihoods for the 30 million people who live in this vast region.

This massive river also forms one of the largest biogeographical barriers in Africa.

For example, human's closest relatives, the chimps (Pan troglodytes) and the bonobos (Pan paniscus), are separated by the Congo River; chimps are found only to the north and bonobos only to the south.

Many other animals show a similar pattern of distribution. The Congo River has clearly played an important role in sorting African biogeography. Nevertheless, we know surprisingly little about the river's history.

We do know that the river has not always looked the way it does today. Geologists estimate that perhaps as recently as half a million years ago, the Congo was a large lake, or series of lakes, with no outflow to the Atlantic Ocean. At some point, the Congo breached a high plateau in the region of present-day Pool Malebo--a peculiar place where the river expands into an enormous 14 mile- (22.5 kilometer-) wide pool. In Conrad's day, this strange place was known as Stanley Pool, after Henry Morton Stanley, the explorer and emissary of the now infamous Belgian King Leopold II.

Most of the great inland lake was drained and a "new" river cascaded down through the gorges of the Crystal Mountain region, dropping about 920 feet (280 meters) over 220 miles (350 kilometers) to reach the Atlantic. Today, some of the most spectacular rapids on Earth and a rich endemic fish fauna are found in the river as it flows between Pool Malebo and the Atlantic. These fishes are termed lower Congo "endemics" because they occur only in this short stretch of the river. It is this region, called the lower Congo River rapids, with its spectacular array of rapids, pools and runs, that is our study area.

The extraordinary hydrology of the lower Congo appears to have isolated it from the remainder of the river basin, and this short stretch represents a model system for exploring patterns of species richness and local endemism, while perhaps also holding the key to understanding the origin and age of the entire Congo River itself. The fishes found only in the lower Congo rapids can only have evolved after the formation of the rapids themselves, and those rapids formed when the proto-lake Congo drained to the Atlantic.

By studying those fishes, we hope to get a handle on when the Congo took its present-day form.

But studying those fishes is no easy task. The area is remote and rugged, roads are few and far between and, when present, are often impassible. What's more, few reliable maps are available to aid our search for access to the river. But unlike Stanley and other earlier travelers in the region, we have the luxury of remotely sensed satellite imagery to help us locate possible access points by road and by foot that can take us to river collecting sites and places to set up camp. Large sand banks and bars that are scattered between huge rocky outcrops along the river make idyllic camp sites from where we can cautiously venture out in local piroges (huge canoes carved out of tree trunks).

Analysis of remotely sensed data also gives us an invaluable bird's-eye view of the numerous macrohabitats and channel features that characterize this hydrologically complex stretch of river. Using the latest remote sensing technologies, and with much on-the-ground sampling and analysis, we are beginning to get a much clearer picture of just how the hydrology of the river has played a major role in isolating fish populations. We have mapped rapids and can begin to measure their power; we have found evidence of extremely deep underwater canyons; we have found blind fishes and fishes with bizarre anatomical features and adaptations to life in fast waters; and we have discovered numerous species new to science.

Yet working in this region is difficult. Catching fish in such turbulent water flowing at extreme velocities over treacherous rocks is a bit like trying to "catch" a needle in a haystack--we rely heavily on the experience and ingenious skill of the local people who have been fishing these difficult waters for millennia.

But despite how much we are learning and documenting, our project has only begun to scratch the surface of this extraordinary place--we are certainly leaving a great deal for our Congolese colleagues and students to continue to explore.

Related Awards
#0542540 Collaborative Research: Evolution in a Vortex: An Inventory of the Fishes and Mollusks of the Lower Congo River Rapids

Related Websites
LiveScience.com: Behind the Scenes: The Freaky Fish of the Congo: http://www.livescience.com/4910-freaky-fish-congo.html
Read more about Stiassny’s work at: http://www.amnh.org/news/2009/12/congo-river-evolution-on-steroids/