Brightest X-ray Vision at the Nano-scale

Superconducting 'universal toolkit' for scientists, engineers will conserve energy, too 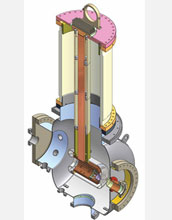 Technology-development studies at Cornell University and Jefferson Laboratory are showing how to use the brightest X-ray light ever generated for the scientific examination of everything from human proteins to forged art.

X-ray beams from an energy-recovery linac (linear accelerator) could be both a thousand times brighter and a thousand times faster--with pulses as brief as one ten-thousandth of a billionth of a second--than current state-of-the-art synchrotron X-ray sources.

"We're closer than ever to building a kind of universal toolkit for all the science and engineering disciplines," says Joel D. Brock, a Cornell University professor of applied and engineering physics.

"To date, the best-existing X-ray diffraction machines like CHESS (the Cornell High Energy Synchrotron Source) have given us ‘snapshots' of life--still pictures, for instance, of a particular virus. ERL will give us 3-D movies as the virus moves, grabs on to a cell and propagates disease. We will have X-ray vision at the nano-scale," Brock predicts, suggesting some questions to be answered:

But an equally pertinent question for Brock and other advocates of the next-generation of X-ray sources is this: How much longer can biomedical researchers, chemists, materials and environmental scientists, engineers, nanotechnologists and biophysicists maintain their competitive advantages without an instrument like ERL?

Moving beyond traditional X-ray crystallography systems--where the arrangement of atoms in crystalline material is revealed by analyzing the way X-ray beams are scattered from electrons in the crystal--the energy-recovery linac offers significant advantages. For one, materials subjected to ultrabright X-ray pulses need not be in crystalline form. And the tightly focused beam allows studies at much smaller scales.

As envisioned and invented by experimental physicists at Cornell, energy-recovery linear accelerators produce high-energy, pulsed X-ray beams by injecting electrons into the electromagnetic fields of a series of superconducting microwave cavities in a linear accelerator. Then, in a return loop, the electron beam is turned into X-rays by passing through undulators, which force the beam to oscillate to the right and left of its mean path with horseshoe magnets of alternating orientations. The pulsed X-rays are now ready for studies in multiple stations at the facility.

Compared to a traditional storage-ring X-ray source, such as CHESS, which recycles electrons billions of times but suffers from a compromised beam size, ERLs send each bunch of electrons through the undulators only once. Again and again, ERLs recover and reuse energy that accelerates electron bunches, while maintaining very small beam size--the key to the brilliance needed to study intimate details at the nano-scale.

The superconducting microwave cavities, which are cooled to -456 degrees Fahrenheit to produce hardly any heat during continuous operation, are among the novel components that proved their worth during the prototype-testing stage of the ERL project. Another component was the photocathode gun that produces electrons--in extremely intense short-duration bunches--for acceleration in the superconducting microwave cavities.

Development of ERL technologies, as well as prototype production and testing, was made possible by about $18 million in support from the National Science Foundation (NSF) and $12 million from New York State (for civil engineering feasibility studies, plus technology and infrastructure development). Cornell University has invested some $10 million in the project, with additional investment planned. ERL technology-development studies were conducted in conjunction with physicists at Jefferson Laboratory (the Thomas Jefferson National Accelerator Facility) in Newport News, Virginia.

Because ERL technology was developed with public money, it is now available to any institution that hopes to build a next-generation X-ray source--including Cornell University, which will propose assistance from federal and state sources.

Construction of an ERL X-ray facility--with national and international availability to researchers in all fields of science and engineering--is estimated to cost between $300 million to $400 million. Just as an ERL recovers energy, building an ERL in Ithaca, New York, Cornell officials observe, would save money by repurposing parts of CHESS and the Wilson Synchrotron Laboratory that were built at Cornell with public resources.

Cornell's Joel Brock wants an ERL, wherever it is built, because his particular line of research needs better X-rays.

"I'm trying to understand the growth of thin films of electronic materials, and it certainly would help to watch--in atomic detail--as we form exotic new materials for advanced optoelectronic applications," he says.

"But the beauty of ERL beams is that they can be used, simultaneously, for every form of science, from archaeology to zoology. In one station on the beam line on any given day you might have an environmental scientist working next to an art historian and a biophysicist--from Minneapolis or Beijing or Amsterdam. ERL really can become a universal toolkit."