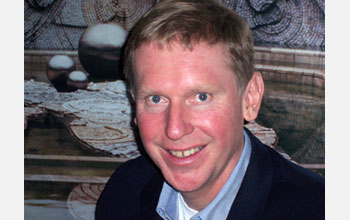 Theoretical mathematician Graeme Milton in his office at the University of Utah.

Applied mathematician Graeme Milton dreams up new materials, develops mathematical formulas to describe them and leaves it to others to construct and demonstrate their novelties and usefulness in a laboratory.

While many of his theoretical musings are published in peer-reviewed journals, his research on a superlens with the ability to hide or "cloak" an object is too similar to cloaking devices portrayed in "Star Trek" and "Harry Potter" to stay buried in the annals of academia.

The concept of a superlens came originally from Sir John Pendry in 2000--although Milton and his colleagues Nicolae Nicorovici and Ross McPhedran conducted closely related studies back in 1994--and has been studied extensively. Yet, no one had realized the cloaking properties until they were discovered through the research by Milton's team.

The concept of a superlens cloak is a long way from a workable device, but the integrity of the mathematical concept has sent some experimentalists into the laboratory to try and turn the theory into reality. So far, the groups working in this area are not ready to publish papers, but they've accomplished enough to keep trying.

"We're a long way off from the 'Star Trek' device but some of the experimental results achieved so far are surprising and exciting," Milton noted.

Milton pursues his research at the University of Utah, where the math department has some of the best scientists in the nation for studying the mathematics of new materials.

While colleagues consider Milton among "the best in the world" with the mathematics of materials, he was not always so highly ranked. In fact, Milton, who was born in Sydney, Australia, came close to failing his sophomore year at Sydney University because he spent so much time reading about advanced subjects such as quantum mechanics and general relativity, that he failed to attend his regular classes, and eventually dropped out of school to spend a year hitchhiking through New Zealand.

He later returned to the university to buckle down and earn his bachelor's and master's degrees in physics, followed by a doctorate in physics at Cornell University. His love of the outdoors led him to accept the job in Utah--he does some of his best thinking while skiing, mountain biking, swimming and road biking.

The superlens theorized by Milton and Nicorovici cloaks a nearby object by making light behave in an unusual way. Instead of having a positive refractive index that makes light bend in the same way as it does when passing from air into a medium like glass or water, the superlens has a negative refractive index that, in essence, causes light to reverse and travel backwards. When an object is placed next to the superlens, the light bouncing off the object is canceled out by the light reflecting off the superlens, rendering the object invisible. Milton said the phenomenon, theorized by Milton and Nicorovici and confirmed by computer, is somewhat analogous to the noise cancellation headphones passengers wear on airplanes.

"At this point, experiments would be considered successful if they worked with a single frequency of light and cloaked a few specks of dust, and the object cloaked would need to be much smaller than the superlens," said Milton. In spite of the challenge, a group of scientists is currently working to demonstrate the proof of principle. "They've made some progress, but they want to do some more work before they put their results in a paper," he added.

Potential early uses for a cloaking device are varied. While stealth military devices are an obvious option, one approach is in medicine, where the concept would allow certain electronic instruments to be used despite the presence of strong electromagnetic fields, such as those produced by hospital brain scanners. Milton and other researchers have also carried out related work that might prove capable of guiding the elastic shock waves of earthquakes around buildings.

While practical applications are fun to speculate about, mathematicians may appreciate the new math presented by the concept just as much.

Devising new materials is how Milton and his colleagues came across the superlens in the first place. A metamaterial's properties are dictated by its internal structure rather than by its composition. His job requires him to discover or design new geometric structures and then develop mathematical formulas to prove their properties. He was working in his home country of Australia on a composite material composed of arrays of coated cylinders when he realized the cylinders could focus light in an unconventional way. That discovery eventually led to his mathematical model for the superlens cloak.