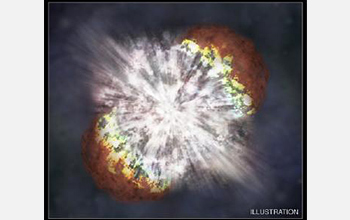 Illustration of a supernova explosion.

Astronomers recently announced that they have found a novel explanation for a rare type of super-luminous stellar explosion that may have produced a new type of object known as a quark star.

Three exceptionally luminous supernovae explosions have been observed in recent years. One of them was first observed using a robotic telescope at the California Institute of Technology's (Caltech) Palomar Observatory.

Data collected with Palomar's Samuel Oschin Telescope was transmitted from the remote mountain site in southern California to astronomers via the High-Performance Wireless Research and Education Network (HPWREN), funded by the National Science Foundation (NSF). The Nearby Supernova Factory research group at the Lawrence Berkeley Laboratory reported the co-discovery of the supernova, known as SN2005gj.

Researchers in Canada have analyzed this, along with two other supernovae, and believe that they each may be the signature of the explosive conversion of a neutron star into a quark star.

These three supernovae, each 100 times brighter than a typical supernova, have been difficult to explain. The Canadian research team thinks the explosions herald the creation of a previously unobserved and new class of objects, designated as quark stars.

A quark star is a hypothetical type of star composed of ultra dense quark matter. Quarks are the fundamental components of protons and neutrons, which make up the nucleus of atoms. The most dense objects known to exist today are neutron stars--stars composed entirely of tightly packed neutrons. A typical neutron star is some 16 miles across, yet has a mass one and a half times the mass of our Sun.

Neutron stars are formed when a massive star undergoes a supernova explosion at the end of its life. The question is, is a neutron star indeed the most dense object that exists? It is thought that if the neutrons are too tightly packed--if what scientists consider a neutron star is too dense--the resulting instability may lead to a further collapse, resulting in a second explosion and the creation of a quark star. The energy that powers that second explosion comes from neutrons breaking down into their component parts: quarks.

Further observations should help to confirm or defeat the hypothesis of quark stars, but in either case, the use of a high-speed network like HPWREN helps astronomers across the world explore the frontiers of science.

HPWREN is an NSF-funded network research project, which also functions as a collaborative cyberinfrastructure on research, education and first responder activities. It includes creating, demonstrating and evaluating a non-commercial, prototype, high-performance, wide-area, wireless network in San Diego, Riverside and Imperial counties in California. The network includes backbone nodes at the University of California, San Diego, and San Diego State University campuses, and a number of "hard to reach" areas in remote environments.

Caltech's Palomar Observatory and the nearby Supernova Factory Research Group at the Lawrence Berkeley Laboratory have also been supported in part by NSF.