Cracking the Code of Images 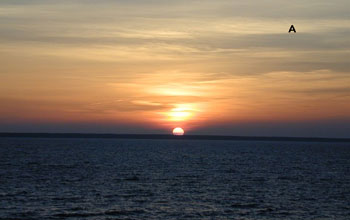 Which of these images has a map of downtown Washington, D.C., hidden in it?

Can you imagine hiding secret messages in a video, or even hiding an entire map of downtown Washington, D.C., in a picture and then sending it out via the Internet?

Hidden information in digital videos and images is a recent and worrisome wrinkle of steganography--the art of writing in cipher or in characters that are not intelligible, except to persons who have the key. Unlike cryptography, which uses encoding to keep messages private, steganography allows secret messages to be hidden in plain sight. Casual viewers of the altered works are not aware that the images or videos contain embedded messages.

The ability to detect embedded messages, known as steganalysis, has taken on added significance with reports of terrorists possibly engaging in steganography in the news. Enter Dr. Charles Boncelet of the University of Delaware. With support from the National Science Foundation (NSF), the professor who holds a joint appointment in the university's department of electrical and computer engineering and the department of computer and information sciences has invented a new method of steganalysis for image-based steganography.

Boncelet's team has focused more on researching the properties of typical multimedia objects, and not so much on the properties of specific steganography methods. The researchers initially invented a new, high performance, lossless image compression method. That image compression technique is used to model images and to detect anomalies typical of hidden messages. Then, a context model is able to estimate probabilities of bits within pixels and input these probabilities to a support vector machine, which classifies the image as either containing steganography or not.

The researchers tested their approach with 2000 images using the new steganalysis method and other current methods. The new technique demonstrated the power of the software. The Boncelet steganalysis method reached 97 percent accuracy, even when only 20 percent of the pixels contained hidden data.  For a more concealed embedding, the method was still over 91 percent accurate with 30 percent steganography. "Our steganalysis work has led to better lossless image compression algorithms," Boncelet said.

Although the fight against terrorism has put it back in the news, steganography is not a recent development.

According to Ross J. Anderson and Fabien A.P. Petitcolas in their paper,"On The Limits of Steganography," a famous case of steganography dates back to 1586 when Mary, Queen of Scots was conspiring to take over the English throne and have Queen Elizabeth of England assassinated. The cipher Mary used was broken and the English secret police obtained the would-be assassins.

And there have been more recent instances, according to the authors. "During the 1980s, Margaret Thatcher (former British Prime Minister) apparently became so irritated at press leaks of cabinet documents that she had the word processors programmed to encode their identity in the word spacing, so that disloyal ministers could be traced."

Boncelet explains that "about a decade ago, when digital watermarking was becoming a hot field," he became more interested in steganography. "In digital watermarking, a watermark signal generally denoting ownership is embedded in another object.  The watermark must survive various signal processing attacks."

"After 9/11, terrorists, traitors and criminals were some of the greatest users of steganography," Boncelet notes. So, he decided to study the other side of the problem: steganalysis, the search for hidden messages.  Since then, he has focused most of his research efforts on this technology.

As with other fields of science, technologies are constantly being improved. "Some of the recently developed steganography methods are quite sophisticated and need new steganalysis methods," Boncelet explains.

He is now working on extending his previous research to other formats and other media, such as JPEG-encoded images and MPEG-encoded videos. "Much of our previous work will transfer, but transform-encoded images have different statistics and different needs", he remarks.

At the moment, Boncelet's team has leveraged their earlier work in image and video compression to model images and videos for steganalysis.  They have developed a method that "works very well in detecting several types of least-significant-bit steganography in images and videos," Boncelet says.

He hopes to develop universal methods for steganalysis that "will work on any--or, at least, most--steganography techniques."

Related Awards
#0442071 ACT/SGER: The Steganalysis of Image and Video Steganography