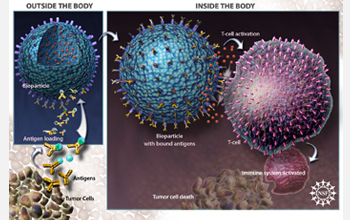 Cancer cells use a lot of tricks and one of the more troubling is their ability to mask their presence, convincing the body's immune system that they are, in fact, part and parcel with the rest of their human host.

If the white blood cells of our immune system--particularly the powerhouse "killer" T-cells--could easily identify cancer, they would become a nanoscale army dedicated solely to eradicating mutated cells.

Bioengineer Tarek Fahmy of Yale University has devoted his life's work to training our bodies to create such armies. The recipient of a 2007 NSF Faculty Early Career Development (CAREER) program award to create immunity-boosting microcapsules that guide T-cells to cancer, he and his colleagues are making breakthroughs. Already finding success in laboratory experiments with mouse cells, Fahmy hopes to move to human trials within five years.

"Nanotechnology and biomaterials science have progressed rapidly in the past few years, and so has our understanding of the fundamentals of how the immune system works in health and disease," Fahmy said.

"What is needed is a bridge that links advances in these sciences," he added. "We found ourselves making connections between engineering new nanoscopic and microscopic biomaterials and tailoring them to interact with immune system cells in defined ways. Artificial cells, as such, can be tailored to tackle immunity, and one of the most highly sought after outcomes in medicine is to have the body mount a strong protective immune response against cancer."

Working in collaboration with his graduate student Erin Steenblock, Fahmy has created cell-sized plastic spheres that both prep the immune system to fight a specific disease and stimulate the T-cells to multiply their forces. Currently targeting cancer, the work may eventually be applicable for a range of diseases, from AIDS to influenza.

"This work is rewarding in the sense that we can engineer existing drugs like cytokines and antibodies by using safe, established polymers in new ways to impact human health in very significant ways," said Steenblock.

To create their immune booster, Fahmy and Steenblock first craft large quantities of the microspheres out of a material called poly(lactide-co-glycolide), familiar to the medical community for its use in biodegradable sutures. Within the microspheres, the researchers encapsulate proteins called cytokines that are known to trigger the reproduction and activation of T-cells.

Cytokines have been used for years in cancer therapy to help boost a patient's natural immune response, but high doses are toxic. Within targeted capsules, the cytokines only go where needed.

Cytokine capsules are not new to cancer treatment, but the new methodology improves on prior methods by releasing cytokines in a controlled way that mimics their natural mode of delivery by immune cells in the body.

To complete the spherules, the researchers affix molecules to the outsides of the filled capsules, in this case, attaching antigens--substances that alert our T-cells to a foreign intruder and simultaneously prime the T-cells to attack. Antigens can be very specific, tuned not only for individual diseases, but for the unique expression of a disease in a single patient.

The antigens in the researchers' latest work are specific for a model protein. Fahmy and Steenblock have also been successful using non-specific stimulant molecules, an approach with broad use as a convenient, off-the-shelf method, applicable to virtually any patient.

The resulting product is a powder that looks like baking soda, each grain a single microcapsule. When Fahmy and Steenblock mixed the powder with mouse T-cells, the cells multiplied at a record rate. In the best runs of the experiment, for every million T-cells introduced to the powder, 45 million emerged, each primed to specifically attack the targeted cancer.

Concludes Fahmy, "The power of this approach is the possibility that one day a physician may reach for a vial of powder, reconstitute the contents, and inject these into the patient as a treatment for cancer or even autoimmune disease."