Key reforms could turn them into world models 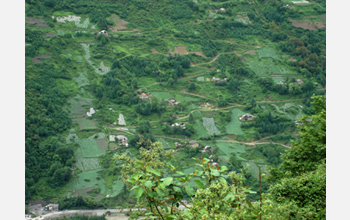 China's Natural Forest Conservation and Grain to Green Programs are an environmental success.

Two of the world's largest environmental programs in China are generally successful, although key reforms could transform them into a model for the rest of the world, according to research results published this week in the journal Proceedings of the National Academy of Sciences.

Jianguo "Jack" Liu, a scientist at Michigan State University, is the lead researcher on the project. Liu and other scientists reviewed China's Natural Forest Conservation and Grain to Green programs that together represent a government investment of more than 500 billion yuan (more than $72 billion).

"These results illustrate the benefits of basic research on coupled natural and human systems," said Thomas Baerwald, program director in the National Science Foundation's (NSF) Directorate for Social, Behavioral & Economic Sciences, which funded the research along with NSF's Directorates for Geosciences and Biological Sciences. "In examining two major Chinese environmental programs, Liu and colleagues have provided generalizable knowledge regarding the complex ways policies affect interactions between natural and human systems.

"They also have generated specific information and insights that will assist Chinese policymakers--as well as policymakers in other nations--to design more effective programs to preserve the environment."

During the past three decades, China's economy has grown the fastest among all major nations, yet its environmental crises have been as supersized as its population. The two conservation programs were introduced after natural disasters--drought in 1997 and massive floods in 1998--wreaked havoc on land weakened by deforestation.

"China has experienced many environmental crises; the 1998 flash floods alone affected more than 200 million people," Liu said. "This is a new way of thinking for China. They have begun to realize the importance of dealing with environmental issues in relation to social and economic issues, and it is paying off."

The forest conservation program was designed to rectify the damage caused by years of unfettered logging, which has led to soil erosion, devastation of habitat such as pandas and other environmental problems. It uses logging bans to replace forests through incentives to forest enterprises. The Grain to Green program works to convert cropland on steep slopes to forest and grassland by providing farmers with grain and cash subsidies.

Both programs seek to alleviate environmental problems and offer alternative ways for people to make a living. They also have important global implications because they increase vegetative cover, enhance carbon sequestration and reduce dust to other countries by controlling soil erosion.

The bottom line: Both programs are working for the environment and the Chinese people. Yet Liu and his colleagues point out that the complexities and the scale of the programs are not without problems. The forest conservation program, for example, put many loggers out of work and caused financial trouble for some small governments that rely heavily on the industry.

Among the authors' recommendations is to establish endowments for the conservation efforts and seek funding from industry beneficiaries such as hydropower plants and from other countries such as the United States.

They also recommend that local governments and farmers become more involved in planning the programs, as opposed to the "traditional top-down" approach dominated by the central government.

Overall, the authors found that the programs are landmark efforts that reward cooperation to solve large-scale environmental problems and consider human well-being. Continuing both programs, they say, is important, as is using them as a model.

"Research has demonstrated that if these policies don't continue, it's likely that a lot of the land that has returned to forest and grassland will be converted to cropland again," Liu said. "The conservation benefits will be lost. It is important to take a comprehensive and holistic approach to sustaining these programs."

Liu added that many Chinese citizens depend on the forest for basic survival. "In many parts of the countryside, there is no access to electricity, or electricity is not affordable so fuel wood is the main source of energy," he said. "Having no forest would result in no means of heating houses or cooking for their children. Environmental problems have tremendous economic and social implications and also create a lot of social conflict as people compete for resources. You're talking about people's lives depending on the environment on a daily basis, not just a weekend vacation."

Liu's co-researchers were Shuxin Li and Xiaodong Chen of MSU, Zhiyun Ouyang at the Chinese Academy of Sciences and Christine Tam at Stanford University.