Finding the Switches to Our Cells' 'Computer' 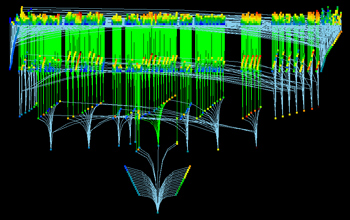 This computer-generated image shows the "family" of switches and how they are related.

What do you and your favorite electronic gadgets have in common? According to new research sponsored by the National Science Foundation, more than you'd think.

If you could look inside the computer chips that power your computer or iPod, you'd find arrays of transistors made up of tiny switches. Each switch can be turned on or off and be in a 'one' or a 'zero' state. This complex system of switches allows electronic devices to hold data in their memories and complete the jobs we want them to do.

It turns out the cells in our bodies also depend on switches, comprised of different chemical reactions that can be switched on or off, to store information and perform their vital functions. Until recently, however, finding these switches has been difficult, and scientists were only able to identify a handful of them.

That was until Naren Ramakrishnan, a professor of computer science at Virginia Tech, and Upinder S. Bhalla at the National Centre for Biological Sciences in India tried a new approach by looking at cells from the standpoint of an electrical engineer.

"A biochemical switch is a basic memory unit," Ramakrishnan said. "We wanted to try to understand the cellular basis of memory and to see exactly how cells make their decisions."

In the July 2008 edition of PLoS Computational Biology, they detail how they used the System X supercomputer at Virginia Tech to search for "switch-like" combinations within a cell's store of possible chemical reactions. They programmed the computer to look for combinations that formed what are known as bistable circuits, that is, groups of chemical reactions that can be switched back and forth into two separate but stable states. This allows a cell to use chemical compounds to model state, much like a transistor switch that can be set to a steady 'one' or 'zero.'

Finding these potential switches among all the hundreds of thousands of reaction combinations in a cell is no easy task. Ramakrishnan and Bhalla estimate that it would take a standard computer approximately one hundred years of continual computations to test them all. But using the System X supercomputer, the researchers were able to identify thousands of switches in a relatively short period of time. They produced a catalogue of all the switch combinations they discovered, providing an invaluable guide to future research.

The System X supercomputer also enabled the researchers to map out a 'family tree' of the switches, which led to another intriguing discovery--although the switches are different, they are related to each other. According to Bhalla, this discovery may offer an insight into how switch designs evolved within cells.

Now, other scientists trying to understand how cells function and how cells can be manipulated to correct abnormalities caused by disease or genetic mutations can utilize this catalogue of switches in their own research. But Ramakrishnan and Bhalla want to continue to use the same viewpoint of an electrical engineer to study cells.

"Switches are the most basic part of a circuit," Ramakrishnan said. "Now, we want to look at other functional units like oscillators, amplifiers, etc. and comprehend the entire wiring diagram of cells."

Related Websites
"Memory Switches in Chemical Reaction Space," the paper published by Ramakrishnan and Bhalla in the July 2008 edition of PLoS Computational Biology that outlines their discoveries.: http://www.ploscompbiol.org/article/info%3Adoi%2F10.1371%2Fjournal.pcbi.1000122