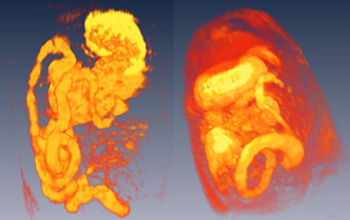 As exhaled bubbles playfully float to the water's surface, a scuba diver swims in the ocean, examining coral. The coral move their tentacles, catching plankton and other nutrient-rich organisms--food the coral need to survive. As the coral ensnare nutrients, currents flow and a big wave moves through the sea, further mixing the water and nutrients. The result is a dynamic, fluid-nutrient exchange.

One can visualize similar mixing and nutrient exchanges through the interactions of the human digestive system. In the digestive conduit, also known as the small intestine, nutrients zip through the body by muscular movements. These cause food to be squeezed along the digestive tract in one direction, acting like an ocean current.

Mixed with the organized peristaltic motion, a back and forth "sloshing" wall motion appears to have mainly a mixing function similar to ocean waves passing through coral. The intestine is also lined with micro-tentacles on its inner walls. These tentacles, invisible to the naked eye, are called "villi." The villi have muscle, so they wiggle and further mix the nutrients traveling along the intestinal wall. The villi movements cause the fluid to swirl in different directions. This motion produces numerous small eddies and interactions leading to improved digestion.

The nutrient interactions with villi inside the small intestine are too tiny to see with the naked eye, and researchers have yet to image these villi interactions with advanced Magnetic Resonance Imaging (MRI) technology. Wouldn't it be great to see in motion this fluidic activity that makes your belly grumble and tumble?

Just as an artist represents depth and molds a material to produce a visual shape, James Brasseur and his multidisciplinary team are rendering their own art through their research at Penn State University. The research team is imaging the macroscopic transport processes moving intestinal fluid. Brasseur specializes in mechano-physiology, mathematical modeling, computer simulation and image analysis of the gastrointestinal (GI) tract. In describing his work, Brasseur says, "My job is to solve medical problems that require engineering input. I focus on two classes of problems: neurophysiology of the GI tract, and the clinical evaluation and therapy."

With the help of his group--composed of Yanxing Wang, students Gino Banco and Amit Ailiani, and his co-investigator, Andrew Webb--Brasseur is studying the modeling of nutrient transport and macro-micro mixing in the small intestine. The group has developed a two-dimensional, multiscale model using the Lattice Boltzmann Method (LBM).

"LBM is a computational tool for analyzing our bioengineering problems," states Brasseur. LBM predicts the behavior of the fluid motions mathematically to model macro-to-micro mixing and transport in the gut. Currently, Dr. Brasseur and his group are extending a two-dimensional LBM to a three-dimensional study of how the villi aid the digestion process.

Brasseur is comparing the nutrient transport of the digestion process at macro and micro levels. "We are trying to understand how the villi movements help digestion. We think that it would help digestion because it brings the nutrients in contact with the epithelium more quickly than if it weren't moving."

Muscle contraction is not enough

In this area of research, Brasseur is investigating the fluid and food movements inside the small intestine. His research team is studying the interactions and scaling of the micro-mixing of the villi in conjunction with the macro-level mixing of the fluid inside the intestine.

"The process of digestion involves interaction between the contractions of muscles in the intestinal wall (about 1-2 centimeters in diameter) with the movement of the villi (at about 0.03-0.04 centimeters in length). Even though these are really small objects, they have a big affect on digestion. The muscle wall contraction is not enough to explain normal digestion," says Brasseur.

"One of our next steps will be to include individual nutrient molecules in our model," he says. "When we can do this, we can study how specific nutrient molecules move. For example, we can compare sugar molecules with protein molecules, which move differently in the small intestine. With this project, I have now done research on the entire gut except for the colon. I would like to study the colon next, so I can say I have studied the entire gastrointestinal tract."

When asked about advice for a future researcher, Brasseur said, "I recommend for you to look at the world around you and try to figure it out. This can last the rest of your life."

It might even add an interesting scientific diversion on your next culinary/oceanographic trip to the Caribbean.