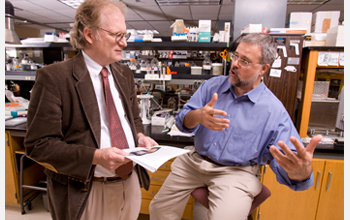 It's a sunny Thursday morning and two accomplished scientists are seated on either side of a non-descript table in a University of Georgia conference room, talking about bread mold.

Bread mold? Nobody uses that term around here. In the lab, it's Neurospora crassa. (Because of its long striations, the growing mold looks like a nerve system, so Neurospora literally means "nerve spore.") Jonathan Arnold, a geneticist, and Heinz-Bernd Schuttler, a computational physicist, are not explaining something as plebian as bread mold, though. They're talking about biological clocks, those internal tickers that, among other things, tell all living things when to rest and when to awaken.

For years, researchers thought that the function of these clocks was relatively straightforward. Now, a new National Science Foundation (NSF)-supported research thrust by the two scientists and their colleagues is showing that the number of genes in Neurospora under the control of the biological clock is dramatically higher than anyone ever suspected.

"We're just now beginning to see why the clock is so far-reaching in its effects on the organism," says Arnold, whose excitement when discussing his latest work is palpable. The clock's off-on abilities don't just intrigue geneticists, either.

Schuttler, whose modeling techniques have been integral to unraveling how the clock regulates genes, is just as animated in telling how the research has been revealing unexpected intellectual and practical richness.

"Physicists love things that oscillate," he says, smiling. "Most model organisms don't oscillate, but this one does. So when it does, we believe it must be important for its survival. We had developed new ensemble modeling techniques that we wanted to try on a new project, so we put the whole method through its paces here and pushed it to the limit."

The idea of a biological clock is easy for most people to understand. For instance, some people rise and shine while others rise and glower. Some can stay up all night while others fall asleep by nine. And yet, these examples are a vast simplification of the overall importance of biological clocks.

The complexity of an organism's response to its biological clock is mind-boggling. The activity is not like a phone call that a gene answers and then responds to. Imagine your house with ten thousand phones, all ringing at once. The biological clock, amazingly, can answer them all simultaneously, and it gives the right answer to whatever question is being asked.

The University of Georgia team's research is helping us understand how all those phones get answered, and what important information may be coming in with each call. The work requires combining genetics and biology, of course, but it also needs massive computer modeling to track the messages and see how they work.

"Systems biology," as this computer modeling is known, is growing hand in hand with genetics as the new way to see how biological networks spin out nearly endless and important messages.

In the case of our friendly bread mold, Arnold and Schuttler found that a stunning 25 percent of its genes appear to be under clock control. This suggests that our old idea, that such clocks are simply an interesting artifact of evolution, couldn't be more wrong. In fact, the findings point toward the biological clock as a crucial player in the health and well-being of all living things.

Before the team's latest research, scientists had found only 16 clock-controlled genes in Neurospora, in more than 40 years of research. Schuttler and Arnold found a stunning 295 genes that are influenced by the clock. And that number may be very conservative.

"Now we can use the model for our next experiment, in which we don't just look at a few genes in Neurospora, but all of them," says Arnold, leaning back and shaking his head with amazement.

Nobody else has used such a model to dig for genes under the control of a biological clock, so the possibility of what comes next makes both scientists--normally serious and fairly quiet--sit up with obvious delight. As more progress is made with Neurospora, plans may take shape to scale their work up to a larger model organism--the mouse--where findings would be applicable to humans.

The research probably won't make night people dislike morning people less, but at least everyone might know the issue is their internal clocks, and those clocks are just listening to their genes.

Related Awards
#0425762 QSB: Computing Life and the Kinetics of the Cell