Anne Yoder, director of the Duke University Lemur Center, and colleagues are using genetic and genomic approaches to unravel the history of lemurs and the primate family tree 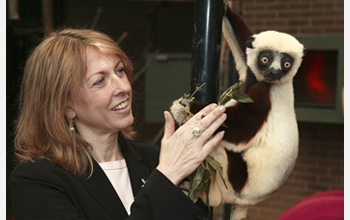 Islands hold a special place in the thoughts of evolutionary biologists like Anne Yoder. They're like floating labs of evolution.

The recipe works like this: put some food, water and shelter in an isolated location where escape and immigration are unlikely. Introduce just a handful of individuals. Cook 60 million years. Decipher results.

"Madagascar, where lemurs evolved, is probably the most productive and exquisite natural evolutionary laboratory on the planet," says Yoder, who is director of the National Science Foundation (NSF)-funded Duke Lemur Center. "And lemurs are the crown jewels of the evolutionary process there."

Since arriving on the large island 62 million years ago, probably half-drowned and clinging to a raft of vegetation blown off Africa by a storm, the small primates that became lemurs have been doing their own thing in an isolated paradise where competitors and predators were few and food was plentiful.

From those soggy founders, the lemur family has split into more than 70 species, adapting and spreading into a remarkable variety of sizes, shapes and personal habits. They now occupy every ecological niche a primate would want to occupy.

How Yoder knows all of this, and why she cares so much about it, is a story in itself.

Her journey, like those of the first lemurs, began by chance. As an average, not terribly motivated undergraduate student at the University of North Carolina at Chapel Hill, Yoder went with her class one day to the nearby Duke Lemur Center in Durham. It's the world's largest collection of lemur species outside Madagascar, and serves a key role in both conservation and research.

In what can only be described as love at first sight, she quickly tightened her focus on zoology as a major and set her sights on studying these fascinating creatures.

The theory at the time, based on a mere sliver of anatomical evidence, was that lemurs had colonized Madagascar from Africa, and then returned to the mainland later to become lorises and bush babies. "As a graduate student, I thought 'What? That doesn't make much sense.'"

She took it upon herself to set the record straight.

Although it is a very old island, whatever terrestrial fossil record Madagascar might have for the period of time relevant to lemur evolution lies under thick soil and even thicker rainforest. So piecing together this family history required some of the newest and most advanced genomic techniques.

Yoder and her colleagues have used powerful computers and the genes of living primates--including humans--to formulate hypotheses about how these animals all relate to one another, and in what order events happened. Today, the prevailing theory championed by Yoder and others is that lemurs, lorises and bush babies have a common ancestor, but the creatures that made it to Madagascar evolved in isolation and under unique evolutionary pressures relative to the rest of the primate family tree, or phylogeny.

"Anne was one of the first and most energetic adopters of genetic and genomic approaches to sort out the phylogeny of lemurs," said Hunt Willard, director of the Institute for Genome Sciences and Policy at Duke. "She recognized early on that genetics could hold the answer to sorting out the primate family tree, especially for branches of the tree that lacked a solid fossil record."

It's the lemurs' similarities to us and other primates that are so fascinating, Yoder says. And so are their differences.

Having established her career as a teacher and researcher who has published many landmark works, Yoder has come full circle to become the director of the very same Lemur Center that changed her life.

Her goal, and the center's, is to understand how lemurs got to be the way they are, and to protect them from extinction. "I want to know what happened. I really want to know."