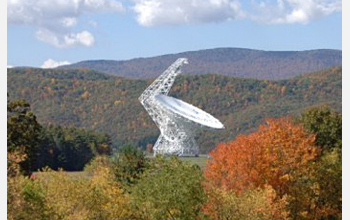 This discovery was enabled by the Robert C. Byrd Green Bank Telescope, funded by NSF.

The astronomers report that the magnetic field they measured in this distant "protogalaxy" is at least 10 times greater than the average value in the Milky Way.

It is thought that slowly rotating galaxies generate magnetic fields, in a "dynamo effect," that grow very gradually as they evolve over 5 billion to 10 billion years.

Astronomers believe the magnetic fields within our own Milky Way and other nearby galaxies control the rate of star formation and the dynamics of interstellar gas. That the magnetic field observed in this young galaxy is much stronger than expected, poses challenges to conventional theories on the formation of stars and galaxies.

The researchers' results were published in the October 2 issue of the journal Nature.

To learn more about this discovery, read the University of California at San Diego news release.