Placing a Dollar Value on Services Provided by Bats 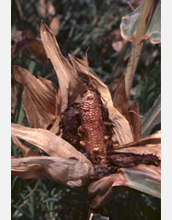 One of the most costly and destructive agricultural pests is moth larva.

How much money can bats save farmers with natural pest control services? That's what Thomas Kunz, a professor at the Center for Ecology and Conservation Biology at Boston University, wants to know.

Each night, more than 100 million free-tailed bats disperse from caves and bridges in south-central Texas to forage for food. They ingest enormous quantities of insects, which include a variety of destructive agricultural pests such as the fall armyworm, cabbage looper, tobacco budworm, corn earworm and cotton bollworm. The magnitude at which these pests can affect crops economically is enormous, but if farmers can determine how bats impact these pests, the number of pesticide applications could be reduced.

Kunz received a five-year, $2.4 million National Science Foundation multidisciplinary research grant that funded the development of an advanced infrared (IRT) thermal imaging system to investigate the ecological and economic impact of Brazilian free-tailed bats on agroecosystems. Kunz's team involved the collaborative efforts of mathematicians, meteorologists, climatologists, economists and entomologists from the University of Tennessee, the U.S. Department of Agriculture and Texas Parks and Wildlife Department.

Studying creatures that fly at night is not an easy task, but Kunz and his colleagues figured out a way to quantify the value of bat services in Texas.

"The great advantage of using thermal imaging infrared cameras to census and to observe flying and roosting bats is that they can be observed independent of any light source," Kunz said. "This technology is non-invasive and thus causes no disturbance to bats. The data can be stored digitally and analyzed in many different ways."

In addition to the IRT thermal imaging system, Kunz and his team relied upon NEXRAD Doppler radar and ground-based visual observations to collect data. What they were able to determine was the size and activity of the bat colonies, and insect life cycle and infestation. Once they associated the levels of bats feeding with the levels of insect infestation, they estimated the amount of crop damage and need for pesticides in the winter garden area of Texas. The NEXRAD Doppler radar data allowed researchers to see how the nightly dispersal of bats paralleled with the time and space of the major emergences of the bollworm moth.

Visual observations of nocturnal activity over the cotton fields revealed a great deal about foraging behavior of the Brazilian free-tailed bats. Scientists discovered that bats are sensitive to changes in insect populations.

"The pests are very episodic, characterized by dramatic increases in numbers, followed by down times," said Gary McCracken, a biologist from the University of Tennessee. "They flush and then disappear, and the bats are somehow able to track these things."

Battling with the Bugs

Pesticides and biological engineering have proven to be somewhat effective in the battle against agricultural pests, but the amount of pesticide applications could be lessened if the presence of natural predators were taken into account.

The caterpillar larva of a moth, Helicoverpa zea, is one of the most costly and destructive agricultural pests that farmers encounter. Agricultural pests cost farmers about $1 billion per year nationwide, which includes the cost of pesticide use and yield losses from crop damage. For cotton crops, a single larva can destroy between two to three bolls of cotton in its lifetime.

Damage to crops occurs early in the larvae stages, and if scientists can determine how the crops will be affected by the presence of bats, they can help reduce the costs for farmers.

Kunz and his team used an avoided cost approach that assesses the costs and expenditures that a society avoids as a result of the presence of bats. Using the individual female bat as a unit for analysis, they were able to estimate the number of larvae that were prevented from reaching maturity by the presence of a single bat. They found that a single bat consuming 1.5 adult moths per night will prevent about five larvae from damaging crops nightly.

The researchers estimated that at least 1.5 million bats feed nightly over the agricultural fields in the winter garden region of Texas. What exactly does this mean for farmers? The researchers calculated that the annual value of insect suppression by bats approaches $1.7 million. What they discovered was that the consumption of moths by Brazilian free-tailed bats reduces crop damage, eliminates one application of pesticide, and possibly delays the time when pesticides are first used. Each of these findings has important positive economic and environmental benefits.

IRT Technology and NEXRAD Doppler radar have produced reliable data to link levels of bat activity with levels of insect infestation. This information is valuable not only to farmers and producers, but to the energy sector with the increased national interest in bio-fuels.

Apart from corn and cotton crops, insect suppression by bats extends far beyond the Texas study region. Kunz, his students and colleagues have turned their research to other crops.

"This year, we have begun to investigate the role of insectivorous bats in pecan agriculture," said Kunz. One of Kunz's graduate students was recently awarded an NSF Graduate Fellowship to investigate this bat-pecan crop relationship. They will be using the IRT technology to census bats and applying other standard techniques to conduct this research.

In addition to agricultural pest research, this NSF grant also funded public education programs to teach people about the importance of bats. For example, over the past five years, Kunz and his colleagues have held media days in Texas. They invited television and news reporters to their field sites to observe what they were doing and provided them with the opportunity to explain the research so it could be shared with public audiences. In addition, they have given lectures to conservation groups, colleges and universities, high schools and elementary schools.

Texas Parks and Wildlife Department produced DVDs for schools and a bilingual book, co-authored by Patricia Morton, called Frankie the Free-tailed Bat. The book has been widely distributed in schools throughout Texas and northern Mexico and it is also available online.

"If bats are not protected in Mexico, where they winter, they won't be as effective in consuming agricultural pests here in the U.S.," Morton says. "Education on both sides of the border is essential to maintaining healthy populations of these highly beneficial animals."