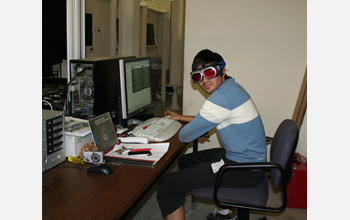 Amid the current energy crisis, our team--working under the direction of Charles Meneveau, the Louis M. Sardella Professor of Mechanical Engineering at Johns Hopkins University, and with colleagues at Rensselaer Polytechnic Institute--is studying the behavior of wind turbines.

There are many massive, giant, man-made structures in real life such as bridges, skyscrapers or planes, to name a few, that can be really hard to study in the "closed and controlled" environment of a wind tunnel.

Placed in an array, as a wind farm, the turbines can be impressive to the human eye. To study these in a controlled manner from a fluid mechanics or turbulence science point of view, we used the concept of scalability.

Taking wind turbines that are on the order of 100 meters (109 yards) across and scaling them to a comfortable laboratory size of around 10 centimeters (4 inches) could be called a stretch.

At Johns Hopkins, we use the Stanley Corrsin Wind Tunnel, named after the late Hopkins professor, to carry out these experiments. After initial trials to recreate an atmospheric-like flow similar to that experienced daily--but now inside a 10 meter by 1 meter by 1.2 meter enclosure--we reached a practical solution.

We manipulated the flow using rotating winglets to add random turbulence, long pieces of acrylic to recreate the wind conditions and sandpaper to imitate terrain.

We carefully designed the experiments and, after plenty of discussion, we decided to create a 3-by-3 array of model wind turbines placed on top of a horizontal plate inside the wind-tunnel, all submerged into the atmospheric-like flow to model the wind farm.

A laser-based technique frequently employed in fluid mechanics problems called particle image velocimetry tracks the airflow. The lasers have 120 millijoule (mJ) of energy during a very short pulse. A single pulse can easily blind a person so safety is strictly enforced--we use the "cool" safety goggles in the lab.

We created a laser sheet that illuminates tiny droplets, created using a fog-machine, that flow around the turbines. We took pictures to track the displacement of the particles to provide the massive amount of information needed.

We took measurements around the clock, and, while waiting for the data to transfer to a hard-disk and for post-processing, the room where all the equipment sat looked like a massive rock concert venue with the green lights flashing and fog.

After carrying out the measurements, our team members needed some time to build up stamina for the data analysis, which involved lengthy discussions and a flux of ideas. We keep motivated during our many hours by recognizing that the research carried out at the lab is pushing the boundaries of science, making an impact on current technologies and society during the current energy crisis.

Our team hopes that this study will allow us to create better and more robust computer models that can represent the large structures and interactions between the periodic and turbulent motions created by a wind farm and the atmosphere. This will aid future wind farm designs, quantify their interactions with local wind conditions, and generate a better sense of how to use wind-power as a very promising, renewable source of energy.