Researchers Peek Under Ice Sheets for Clues on Climate Change 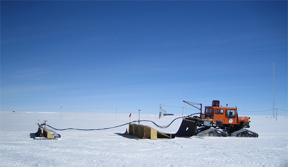 A team of National Science Foundation (NSF)-funded researchers wants to look under the ice sheets in Greenland and Antarctica to see if they are sitting on bedrock or water.

"If the ice sheets are frozen to the bed, they will move slowly due to gravity; if they are sitting on water, they will move much faster," said S. Prasad Gogineni, professor of electrical engineering and director of the Center for Remote Sensing of Ice Sheets (CReSIS) based at the University of Kansas. "Uncovering that information will give us some insight into what processes are causing the area to be changing so rapidly."

Together, the ice sheets in Greenland and Antarctica contain enough freshwater to raise global sea level by more than 190 feet if they were to melt entirely and transfer to the world's oceans. A complete collapse of these vast reservoirs of ice is unlikely in the near future. However, recent observations have raised the real possibility that the contribution of the great ice sheets to global sea level rise over the next century may be greater than current models suggest.

Rising sea levels can adversely affect communities near the shoreline, especially in third world countries, and they are believed to be an indicator of global climate change.

Until recently, the prevailing view was that these large ice masses moved sluggishly, and discharged ice from their interior to the world's oceans at a slow, orderly, and predictable rate. This view was increasingly challenged as observations of rapidly changing outlet glaciers and ice streams became available. For example, the Jakobshavn Isbræ glacier in Western Greenland more than doubled its speed from around 3.72 miles per year in 1992, to nearly 8.68 miles per year in 2003.

Because of the immense size and complexity of these ice sheets, scientists need data from satellite and airborne platforms, combined with ground-based measurements and observations, to accurately assess their mass and composition.

Gogineni and his colleagues have adapted synthetic aperture radar technology, developed for remote sensing in space, to the ice environment. By increasing its sensitivity and integrating the technology with aircraft instrumentation, the researchers report the advanced radar system can image large areas of ice-bed interfaces located below an ice layer more than two miles thick. The ability to generate radar images of large areas of ice is a big improvement over past studies that have sought to understand what is happening beneath the ice sheets.

According to Gogineni, data from remote sensing satellites, combined with images generated by this radar sensor, may revolutionize the study of polar ice sheets. "We have demonstrated we can map the layers of ice all the way down to the ice-bed interface. The layers are like tree rings; they tell a story of climate history."

The researchers ultimately expect their data to improve existing models of the composition and movement of the ice sheets. Their findings may cause some traditional explanations about the ice sheets to be reconsidered. For example, traditional models have assumed the ice sheets were frozen to the underlying bed material. Early data indicate the presence of water beneath the ice in many areas. That finding could be significant because a lot of water predicts a lot of future ice movement, but Gogineni cautions that more work needs to be done before they can draw any conclusions.

"We need a lot more data and we want to make sure our results are accurate," he said. "After that, we need improved models to understand the effects of climate change on the ice sheets so we can accurately predict sea level rise."

Dorthe Dahl-Jensen, a world-renown glaciologist at the Centre for Ice and Climate, Niels Bohr Institute, University of Copenhagen, endorsed their research as outstanding. "The radar data collected by Gogineni's team at CReSIS have immense value for further research on modeling the Antarctic and Greenland ice sheets to predict their reaction to global warming. In addition, the selection of the site for the deep ice core drilling in North Greenland would simply not have been possible without the radar data."