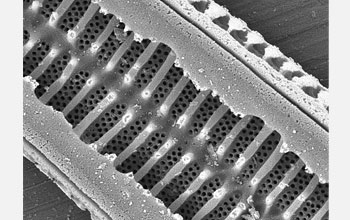 Image of the diatom, Stenopterobia curvula.

If the long-forgotten remains of an undiscovered dinosaur were found hidden in the Pocono Mountains, the story likely would run looped on every 24-hour news station in the country. But when an entire new genus of microscopic organism that existed in the time of the dinosaurs is discovered, the world doesn't blink an eye.

But it is these creatures--so tiny that just a sliver of mud can hold thousands of species--that may hold the key to understanding the past, present and future of our planet's climate.

Over the past 20 years, Siver has discovered 60 unknown species and one previously unseen diatom--an odd organism with a skeleton of finely detailed glass--that represents a new genus (a broader category of organisms, representing at least one species).

His work on the subject has taken him across North America, from the Atlantic Coastal Plain of North Carolina to the Northwest Territories of Canada and to hundreds of lakes from Florida to Newfoundland. Botanist admirers have named more than one species after Siver.

He is frequently called upon by detectives across the country to solve crimes, in which the only clue may be a smudge of mud on a shoe. By observing the diatoms inside that mud, Siver is able to pinpoint the kind of water body where that mud originated, providing important evidence in a crime.

"These little guys have been used to solve murder cases," said Siver.

Using a tube of mud less than a meter long, Siver can learn things about the environment dating back hundreds of years. The deeper down in the mud he is able to go, the further back in history he can go.

Deep in the cold tundra of northern Canada, where it is dark much of the year, Siver recently had the opportunity to sample mud dating back 48 million years. The material lay deep in the bowels of a diamond mine under 150 feet of glacial material that covered the remains of an ancient lake. Viewing the mud sample under an electron microscope, Siver discovered a microorganism identical to those that exist today in the tropics. These tiny organisms had instantly proven that the area was once warm and tropical.

"By knowing the different species and being able to tell them apart, we can better tell how water bodies are being affected and changing. This has huge implications for understanding climate change," Siver said.

In 2005, Siver and two other scientists traveled to Saco Pond, a small spring-fed water body nestled in the White Mountains of New Hampshire, to examine a genus of diatom discovered there by F.W. Lewis in 1864. By digging below the mud of the pond to pull up a sample of the same material deposits Lewis would have been looking at in the 1860s, Siver was able to compare his sample with others he had found in highly acidic ponds scattered along the Atlantic Coastal Plain of North Carolina.

But what Siver discovered is that several species of microorganism that had long been believed to be similar, enough to be grouped into the same genus, were actually quite different.

To prove it, Siver traveled to the Academy of Natural Sciences Museum (ANSM) in Philadelphia, Pa., to find the original microscope slide deposited by Lewis in 1864--long before the invention of the electron microscope, which can magnify an image to 100,000 times its size. With rare exceptions, light microscopes can only magnify objects 1,000 times, at best.

Under the electron microscope, Siver had discovered differences in the organisms that wouldn't have been visible to Lewis in his time. And while those differences would seem subtle to the average observer, in the scientific world, they are akin to confusing a black bear with a koala. The two don't live in remotely the same climate. And if the remains of a koala were discovered somewhere, it would say one thing about the environment it lived in, while the discovery of a black bear would say something else entirely.

The slides at the ANSM were so old, that some had been warped, making them more difficult to observe. Others were not properly marked. Siver ultimately required the help of a handwriting expert, who helped him at the bequest of a detective friend, to prove that all the slides had been prepared by Lewis.

In the end, Siver was able to compare Lewis' slide, his own slide from Saco Pond and the slides of diatoms Siver had discovered along the East Coast of the United States to make his case for two new species of diatom.

In 2008, Siver's research led him to the discovery of the new genus of diatom, one that helps to trace the evolutionary origin of the "raphe" in diatoms--a huge leap in evolution for the microorganisms.

"Some people have said the evolution of a raphe in a diatom is like the evolution of wings in a bird. They can move out of the way of something in their path, survive, instead of being at the will of everything around them," said Siver.

It took Siver two years to find his proof.