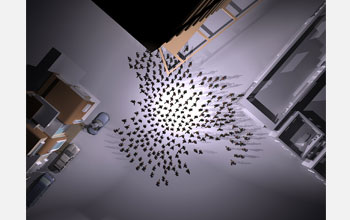 A fleeing crowd of artificial agents in a synthetic city.

Everyday, all over the world, people assemble peacefully into crowds at places such as shopping malls, sporting events, concerts and tourist sites--but crowds can shift from peaceful to unruly, even riotous, in just a few minutes given the right conditions.

The factors that cause a "charged" crowd to reach a "tipping point" and erupt into violence are not well understood by scientists because crowd behavior is so difficult to study. No one wants to incite a riot for the sake of science and surveys of individuals about their behavior as part of a crowd have not been that reliable.

"Crowds are complex, adaptive systems that may seem chaotic but have an underlying order," said Paul Torrens, associate professor in the School of Geographical Sciences at Arizona State University, and director of its Geosimulation Laboratory. "They self-assemble in time and space and exhibit geometric patterns based on layer upon layer of human-to-human and human-to-environment interactions. They are almost impossible to model realistically."

But that is exactly what he and his colleagues are intent on doing.

Torrens and his research team, with funding from the National Science Foundation (NSF), are developing a synthetic laboratory populated with thousands of artificial agents to experiment with ideas and theories about crowd behavior and dynamics that would otherwise be impenetrable to academic inquiry. Of special interest are the geographic processes that occur for a crowd to become charged and then cross over the tipping point into a full-blown riot.

"People interact over space and time--socially, physically, verbally, and, increasingly, digitally--with each other, within groups and between factions to cooperate and conflict in seditious crowds," Torrens said. "We model riot dynamics from the bottom-up, at the geography of individual crowd participants."

Each artificial agent in the synthetic laboratory possesses a "brain" that allows it to function as a distinctive individual within the broader group framework. Researchers can record and analyze each agent's behavior, activity, social and anti-social interactions, and explore how those behaviors adapt as conditions unfold.

These simulations permit model-users to modify the spaces where activity will take place, adapt agent behaviors and shift agendas to replicate a broad range of social and environmental conditions. They also provide different perspectives, so the researcher can watch the scenario from above or be immersed into it.

One of the most significant findings from scenarios studied in the synthetic laboratory is the rapid exchange of nonverbal information in crowds through expressions, locomotion and individual interaction with other individuals.

"Every individual in the crowd brings social, environmental, cultural, gender and past-experience influences to the mix," Torrens said. "We also know individual behavior can be influenced negatively or positively by the crowd's collective psychology."

For example, individuals who would never ordinarily engage in antisocial behavior such as looting might do so anyway when associated with a riotous crowd; and, conversely, antisocial individuals may see their bad behavior checked by other members of a well-behaved crowd.

"When I was living in New York, I saw a number of individuals engage in antisocial behavior on the subway, only to have their behavior be immediately tamped down by the other passengers," Torrens said. "Mob mentality can be a positive, peace keeping force, but we don't think of it that way because those are not the incidents that make it onto the evening news."

When mob mentality goes the other way, with escalating tension and violence, it may be possible to identify shifting patterns and phases in a crowd in the minutes leading up to a tipping point, Torrens believes. If so, law-enforcement and other officials could be trained to recognize the patterns and counter them with tactics that calm rather than incite the crowd.

"At some future date, we'd like our model scenarios to be reviewed by police officers who have worked on the ground with crowds for a number of years to see if their experiences agree with what our models are demonstrating," Torrens said. "We think the information exchange would benefit both of us."

The researchers are also sharing their findings with commercial companies in exchange for modeling software. "Most software games depict crowds as little more than cardboard cutouts," Torrens notes. The designers would love to create more sophisticated depictions. It would make their games far more realistic."

Ordinarily scientists calibrate a new model with known data, but the lack of data made that impossible for Torrens and his colleagues. To find data to inform their scenarios, they are extracting information from existing videos of crowd behavior, taking surveys of their own and using case studies of adults and children--even animals. Data from ant farm studies has already found its way into the synthetic laboratory. With additional NSF funding, they recently launched a study of preschool children to determine how and where they form groups in their school environment. A panel of observers will track the movement behavior of the kids in space and time.

"We're trying to extract rules of how they form groups over time," Torrens said. "Do they gather around toys, other children or their teachers?" The panel will study them all day, every day, for three years. "It's a remarkable opportunity because these children have never been social before, so their behavior is completely fresh to the environment."

In five year's time, the researchers hope to run a realistic scenario with a cast of thousands in an entire city section. The results of their research will provide valuable new insights and information for those engaged in crowd control, emergency management and urban planning. The modeling framework will also be easily adaptable for use by other researchers.

"This research is dramatically transforming the way crowds and the actions of individuals within crowds are studied," said NSF Program Officer Thomas Baerwald. "In addition to its enormous value for practitioners, it is stimulating innovative new lines of inquiry in the social, behavioral and computational sciences."