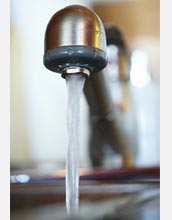 As clean water sources decrease, the U.S. will need a new strategy for removing contaminants.

A worldwide water crisis is imminent and will severely stress much of the world by 2025 unless new purification techniques can adequately and economically treat all sources of water. That's the prognosis of water-treatment expert Mark Shannon, director of the Center of Advanced Materials for Purification of Water with Systems at the University of Illinois at Urbana-Champaign.

"Current processes to purify water require a lot of chemicals and a lot of energy, making treatment too costly or unavailable for much of the developed and developing world," Shannon said. "The difficulties in treating water are only expected to worsen as resources become more constrained."

Shannon's research center, with funding from the National Science Foundation, is developing sensors with specially designed and synthesized DNA to detect trace amounts of lead, mercury, arsenic and other contaminants. The sensors can be produced in the form of sophisticated testing instruments suitable for use by metropolitan water districts or in the form of test strips similar to those used in home pregnancy tests for households and other limited water users.

Shannon's colleagues also have synthesized chemically activated fibers and granules of carbon for removal of heavy metals and pesticides, like atrazine, in the presence of natural organic matter that interferes with many existing sensors. Water contaminated with pesticides is a critical problem for water in the Midwestern United States.

More than 1 billion people worldwide lack access to clean water and, in developing countries, more than 2 million people a year die from water-related problems, with the numbers growing. Because of declining snowpack storage and the loss of glaciers that feed rivers year-round, major river systems throughout the world will experience periodic water shortages. Aquifers are suffering from declining water levels, saltwater intrusion and inadequately replenished fresh groundwater; in some areas, demand for potable water exceeds available resources. This worldwide water crisis is made worse by deteriorating infrastructure, growing population, contamination and high demand for water in energy-generating processes.

Despite seemingly abundant water supplies, clean water shortages will have a critical impact on the people of the U.S., with problems across the nation. Expected population growth, contamination of fresh water from agriculture and industry, and the traditionally low cost of water in the U.S.--coupled with the perceived risks of investing in new and unproven technologies--are all preventing the commercialization of innovative technologies. As clean water sources decrease, the U.S. will need a new strategy for detecting and removing contaminants.

The center's research efforts are now able to detect specific contaminants in the parts per trillion range, where only parts per million was previously possible. The ability to detect toxic compounds at these levels will allow research to be conducted on what the health impacts are of certain contaminants at these previously unattainable lower levels.

"Low cost purification methods are in demand," said NSF Program Manager Rosemarie Wesson. "The fact that the Shannon team has developed methods to cost effectively detect and remove pesticides and heavy metals from water is intriguing. This work has not only expanded the knowledge base in the area of adsorption and sensor techniques, but the impact on society around the globe is just as exciting."

The technologies also allow for real-time detection and reduction of contaminants. Currently, water samples are taken and sent to a lab for analysis, which can lead to a two-week delay before action can take place. In the current era, where secure water sources is an integral part of national security, having real-time instantaneous contaminant detection and online catalytic reduction systems could save lives, and increase end-user health. Real-time detection can also enable select contaminant treatment, which has the potential for reducing operational costs.

"Our researcher at the center is structured around a model of interdisciplinary and international collaborative research," Shannon said. "A reliable, sustainable supply of clean water is a worldwide need and a worldwide crisis in the making. Everyone needs to participate in the solution."

Related Websites
The Center of Advanced Materials for the Purification of Water with Systems: http://www.watercampws.uiuc.edu/