Did You Say Flexible Electronics? 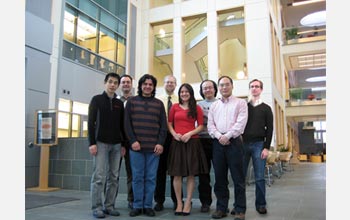 Someday, moving a large, flat-screen TV across the country might be as simple as taking it off the wall, rolling it up and sliding it into a sturdy tube. That's the vision of researchers Christopher Ober and George Malliaras at Cornell University, and Andrew Holmes at the University of Melbourne, Australia, who are fabricating organic semiconducting materials with a little help from supercritical carbon dioxide, or CO2.

Electronics today are dominated by inorganic materials, especially silicon. Development of organic electronic devices, necessary for that desired flexibility, has been stymied until now because ordinary solvents used in the photolithographic process are very damaging to active organic materials. The researchers, funded by the National Science Foundation, have developed a new process that instead employs supercritical CO2--a far gentler solvent with properties midway between a gas and a liquid.

Supercritical CO2 is an unusual solvent, not quite polar like water, but not quite non-polar like hydrocarbons. As a result it will not dissolve most organic semiconductors. It also has almost no viscosity, and it will wet everything. That means that only certain molecules or polymers are soluble in it. Researchers take advantage of these unique attributes by designing special photoresists that will work in such an environmentally friendly solvent.

The new fabrication process means layers of organic materials can be stacked and the interface between the layers isn't disturbed in the fabrication process. "The interface region is important for charge transport," Ober said. "If it remains undisturbed, we can fabricate small-scale structures with the same electronic characteristics as current large-scale devices."

With the new technology, electronic displays would be made of organic electronics on a substrate of plastic, which, in addition to being flexible, is cheaper, lighter and more durable than current glass displays. Because the display is capable of generating its own light, the image would be clear in strong sunlight, another advantage over existing technology.

A smart bandage would revolutionize wound treatment. The bandage is something that hasn't changed for 10,000 years. To check a wound's progress, it is still necessary to peel back the bandage. "Smart bandages could monitor wound healing without disturbing the bandage, administer antibiotics as needed and send a medical staff up-to-date information about the wound's treatment," Ober said.

As for solar energy, organic electronics could give the technology a giant step forward. Only a very small fraction of power today is generated by solar cells, which convert solar energy into electricity, because they are expensive to produce and the efficiency of most common panels is only about 10 percent.

"With organic semiconducting materials, the panels would be much smaller, much more efficient and lighter than the current technology, making them much cheaper to produce and easier to mount on buildings," Ober said.

Experts predict if the cost of producing solar cells could be reduced by a factor of 10, solar energy would be not only environmentally favorable, but also economically favorable.

While the U.S. scientists provide expertise in evaluating the properties of materials and in the use of supercritical CO2 in device fabrication, the Australian group brings to the collaboration its synthetic capabilities to provide photo-resistant materials designed to work together with supercritical CO2.