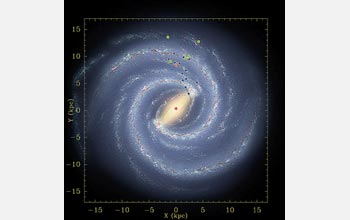 Locations of star-forming regions (dots) on an artist's conception of the Milky Way.

Even as astronomers map out the vast extent of the universe with increasing accuracy, measuring the dimensions of our own cosmic backyard has proved extraordinarily difficult. New determinations of the position and speed of 16 bright objects up to 20,000 light years from the sun show that our home galaxy, the Milky Way, is rotating about 15 percent faster than astronomers had thought. That in turn increases the galaxy's mass by 50 percent, compared to previous estimates, and means that we may run into the Andromeda galaxy, the Milky Way's sister, earlier than expected--although that event, fortunately, is at least a few billion years in the future.

The Milky Way is a spiral galaxy, with the youngest and most massive stars collected in arms that curl around the galactic center. Remarkably, astronomers have not been able to agree on just how many spiral arms the Milky Way possesses: two, curving off in opposite directions from the center and wrapping around fairly tightly, or four, wrapping around more loosely? The confusion arises because it's been hard to ascertain precise distances to nearby stars, and therefore, hard to figure out the position and geometry of the spiral arms where these stars reside.

Mark Reid of the Harvard-Smithsonian Center for Astrophysics led a team that measured precise distances to 10 bright galactic landmarks using the National Science Foundation's Very Long Baseline Array (VLBA), 10 radio telescopes at sites from Hawaii across the continental United States to the U.S. Virgin Islands.  The team looked at compact regions within spiral arms where new stars are forming in abundance. Heated gas in these regions forms so-called cosmic masers, which emit intense radio waves in the way that a laser emits amplified light.

The astronomers pinpointed the distances to these bright radio sources using an old-fashioned technique. By making observations six months apart, when the Earth is on opposite sides of its orbit around the sun, the VLBA sees the masers from a slightly different perspective, and the tiny shift in each maser's apparent position on the sky directly reveals how far away it is. The method may be old, but VLBA's high-precision measurements allowed Reid and his team to get accurate distance determinations out to 20,000 light years or more from the sun--a substantial achievement, given that the Earth is about 30,000 light years from the galactic center.

By mapping the positions of four masers that sit in the same spiral arm segment, the team found that the arm makes a relatively large angle of about 16 degrees to the circumference of an imaginary circle drawn through the galaxy at that same point. The bigger that angle, the less tightly the spiral is wound, and this result suggests that four spiral arms are needed to explain the overall pattern in which stars are scattered throughout the Milky Way. Other observations, however, particularly of older stars, suggest that the galaxy has only two spiral arms. It's possible, the researchers suggest, that there are two dominant arms, containing both old and young stars, along with two less prominent arms that have only younger stars.

To infer the size and rotation of the galaxy as a whole, Reid and his colleagues had to fit their distance measurements by adjusting standard models of the galaxy's structure. The best fit indicates that the sun's distance to the galactic center is not quite 28,000 light years, about 5 percent larger than the previously assumed distance. The sun's speed of rotation about the galaxy came out almost 15 percent higher than the previous best estimate, at 250 kilometers per second (km/s), (570,000 miles per hour), rather than 220 km/s (495,000 mph). Reid notes, however, that a variety of recent analyses had put the sun's rotation speed at anything from 180 km/s to 270 km/s, so finding an answer at the higher end of the range was not all that surprising.

Those adjustments have drastic implications for the Milky Way's total mass, most of which is in the form of unseen 'dark matter.' The new analysis indicates that the galaxy's mass must be about half as big again as the earlier estimate. Our galaxy is moving toward its twin, the Andromeda galaxy, at about 100 km/s, although it's not known whether the two galaxies are on a direct collision course or will pass by.

The higher the Milky Way's mass, the sooner that encounter will happen--in perhaps 5 billion years, Reid says, going by the new numbers. Given that our sun is estimated to last about the same time, it's touch and go whether anyone will be around on Earth to see the outcome.