Tiny quantum force, measured for the first time, could be an aid to nanodevice designers 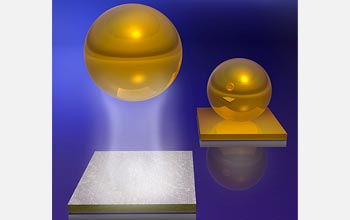 The famous uncertainty principle of quantum mechanics brings inexactitude into many kinds of measurements. One consequence is that a state of absolute rest of the constituents of matter--atoms, molecules, electrons--is impossible even at temperatures close to absolute zero.

On a plain slab of metal carrying no overall electric charge, tiny positive and negative charges flicker back and forth on the surface below the limit of direct detectability. Nonetheless, those fluctuating charges can produce measureable effects, notably a minute attraction that can arise between materials separated by a few tens of nanometers.

Federico Capasso of Harvard University and his colleagues have now demonstrated for the first time a repulsive force arising in similar circumstances. The effect could have value in the functioning of various nanostructures, overcoming friction and sticking between ultrasmall components of a device.

In 1948, the Dutch physicist Hendrik Casimir theorized that an attraction would arise when two metal plates are brought close together in a vacuum. In essence, charge fluctuations on one plate induce fluctuations on the other, and the interaction of the two produces an attractive force. Soon after, he realized that as the distance between the plates grew larger, the increasing time needed for electromagnetic influences to flit back and forth between the plates would make the attraction weaker than he had first supposed. Then in 1956, the Russian physicist Evgeny Lifshitz worked out a more general treatment of the problem for materials other than metals, separated by some fluid rather than a vacuum.

Under the right circumstances, this Casimir-Lifshitz force can be repulsive instead of attractive. The two plates must be made of different materials, and they must be separated by a fluid whose response to electric fields is intermediate between that of the plates themselves.

To test this part of the theory, Capasso and his colleagues measured the force between a gold-coated polystyrene sphere 40 microns in diameter and a plate made either of gold or of silica, all immersed in the organic liquid bromobenzene. They mounted the tiny sphere on the arm of an atomic force microscope, and used lasers to detect the bending of the arm as they brought the sphere closer to the plate. From that they could calculate the force on the sphere.

To make sure that they were measuring only the Casimir-Lifshitz force, the researchers took extraordinary measures to eliminate any stray electric charges in the experimental system. They also moved the sphere toward and away from the plate at different speeds, which allowed them to subtract out forces arising from the motion of the sphere through the liquid bromobenzene.

As the gold-coated sphere was brought closer to the gold plate, the researchers measured a tiny attractive force. But when they used a silica plate instead, they found a repulsive force starting at a separation of about 80 nanometers. The forces involved are tiny indeed--around one ten-billionth of a newton. Picking up an apple requires a force of about one newton.

The measured forces agree fairly well with predictions from the Casimir-Lifshitz theory. Any discrepancies, the researchers say, are most likely due to insufficiently precise knowledge of the electromagnetic properties of the materials used in the experiments.

As well as verifying experimentally an esoteric aspect of quantum mechanics, the existence of a repulsive force could be a boon in the design of nanodevices with tiny moving parts. Such devices must cope with friction, the force that resists sliding motion of touching surfaces because of the slight adhesion between them. For nanocomponents of the right composition, immersed in a suitable liquid, the repulsive Casimir-Lifshitz force would amount to a kind of quantum levitation that would keep surfaces slightly apart and allow easy movement.

Bromobenzene, chosen in these experiments for its electrical properties, would not be a good practical choice, Capasso says, because of safety concerns. But many other suitable liquids exist, he says. Teflon could substitute for silica, and metals other than gold would also produce repulsion, so that designers of nanodevices would have range of building materials to draw on.

The work appeared in the January 8 issue of Nature.