For postdoctoral researcher Andrew Steiner and other astrophysicists, the shockwave that jolted the Earth in late December 2005 was a lucky find, providing new data on neutron stars 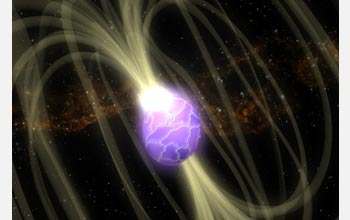 Really, you didn't feel it? In the closing days of 2005, the shockwave of a gigantic quake jolted the Earth's atmosphere, and you didn't detect the tremors?

There is this minor detail: the shakeup happened light years away, on the crust of a neutron star, and the wave rolled by our planet as X-rays, not ground-rocking rumbles. So unless you can see in the ultra-ultraviolet, the failure is not exactly your fault.

As a theorist who's always on the lookout for new phenomena to explain, Andrew Steiner keeps close tabs on X-ray data beaming down from satellites. And, like scores of astrophysicists around the world--like anyone minding the right parameters, really--he couldn't miss that late-December event, or at least the buzz it generated among his experimentalist colleagues.

"It was enormous," he says. "This is one of the most violent things you can do to a neutron star without destroying it. In fact, nothing of this magnitude has ever been observed, not in all the years since 1600 or so, when people started taking astronomical records."

Steiner would know. He's a postdoctoral researcher at the Michigan State University (MSU) National Superconducting Cyclotron Lab--a national user facility for experimental nuclear science supported by the National Science Foundation (NSF)--a member of the Joint Institute for Nuclear Astrophysics (a collaboration between MSU, University of Chicago and Notre Dame), and an expert on neutron stars. His subject is an exotic species: certain super-hot, super-dense leftovers of what you might call regular stars.

Every star eventually burns out, finishing off its nuclear fuel and collapsing under its own gravity into one of many strange senior forms. Stars like our sun swell into a red giant, then cool down to a white dwarf. Much more massive stars blow out and cave in to form black holes. Stars just a little more massive than our sun end up as even odder creatures: neutron stars.

"My field is like star geriatrics," laughs Steiner. And neutron stars are one of the weirdest ways to go. Inside, they're a thick soup of extremely neutron-rich nuclei and, closer to the core, free-floating neutrons. Scientists don't fully understand that bizarre material, but they know it's nothing like matter on Earth. One teaspoon weighs about as much as every human who has ever been born, combined. Outside their super-fluid centers, neutron stars sport a solid shell of relatively ordinary atomic nuclei and electrons. Most of the time, the star's intense gravity keeps it impeccably smooth, with maximum surface imperfections of half a millimeter.

Despite their striking makeup, neutron stars don't look like much. Most of their radiance comes in wavelengths too short for our eyes to see. It's what you don't see that captivates astrophysicists.

Certain varieties of neutron stars, including Steiner's specialty--soft gamma-ray repeaters--have extremely strong magnetic fields. And some highly-magnetized stars also emit electromagnetic beams that reach Earth in Morse-code-like pulses. Forty years ago, when scientists discovered the first such pulsar, they cheekily named it LGM-1, for "little green men." Now, we know that pulsars owe their rhythmic emissions to a regular rotational period. Like radio lighthouses, they sweep beams across their galaxies and beyond.

Pulsars may be the most flashy of neutron stars, but they aren't the only ones that spin. When any neutron star forms, it hangs onto the angular momentum of its parent nebula. Some rotate quickly, more than a thousand times per second, while some take a full 30 seconds to turn. Over time, all leak energy through their rotating magnetic fields. It's that slowdown that causes starquakes.

A neutron star's surface, baby-smooth though it is, rarely forms a perfect sphere. Rapid rotation causes the crust to bulge out around the middle. But as the spin slows down, gravity, which is essentially stuck to the crust, becomes twisted. The only way to untwist the crust is to break it and reconfigure it, thus the starquake.

That's what happened on SGR 1806-20, a neutron star 50,000 light years away, in the direction of the Sagittarius constellation. In a tenth of a second, the star released more energy than the sun has radiated in all of human history. We're lucky the shock didn't come from any closer, said a report from the Harvard-Smithsonian Center for Astrophysics. Had the source been 10 light years from Earth, the energy surge would have fried our ozone and possibly triggered a mass extinction.

When the once distant X-ray wave eventually swept past Earth, it still packed enough power to briefly disrupt our upper atmosphere. And it provided Steiner and his theorist colleagues with a heap of fresh information. "Bursts like this are ideal data sources," he says. "Analyzing these X-ray emissions is how we determine the size and composition of neutron stars."

But there's one fact that makes research particularly tricky. It's the same problem that plagues seismologists trying to predict quakes on earth. Big events are rare, and they're hard to predict.

"A lot of this research comes down to chance," says Steiner. "You have to wait until something happens, which is why the 2005 event was such a lucky find."

Good thing he was watching.