How to Teleport Quantum Information from One Atom to Another 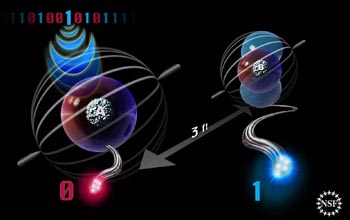 Although their achievements haven't yet risen to the sophistication of the Starship Enterprise's transporter room, physicists in recent years have learned how to fully transfer the identity of one particle onto another particle at a separate location--a form of teleportation made possible by the strange rules of quantum mechanics.

Now, researchers have for the first time succeeded in teleporting the state of an atom across a significant distance to another atom. That's important because atoms can be trapped and held in the same quantum state for considerable periods of time, so can serve as memory units for quantum information. Teleportation between atoms could therefore be an important ingredient in quantum computers or quantum communication systems.

What's transported by quantum teleportation is not an actual particle but information about the quantum state of that particle--in essence, a full specification of the particle's energy and motion, as well as intrinsic properties such as its charge and spin. The first demonstrations of teleportation transferred a quantum state from one photon to another. But because photons, the quantum units of light, are flighty creatures, impossible to pin down in one place, they are not convenient for applications such as quantum computing, where the goal is to create and control quantum states so that their interactions perform a desired calculation.

Far more useful in that regard would be the quantum state of an atom--the energy and spin of a particular electron, for example--since atoms can be held and maintained in a certain state for periods of a second or more. Some recent experiments have demonstrated teleportation between photons and atoms, or between atoms at very close range, but Chris Monroe of the University of Maryland and his colleagues have now teleported atomic states over a distance of one meter.

To see how this example of teleportation works, it's easiest to go through the experimental procedure step by step. The team begins with two ionized atoms of the element ytterbium, each one trapped at an ultralow temperature in separate devices one meter apart. By shining a sequence of brief laser pulses at the ions, the physicists can put them in what are called superposed states, in which each ion in effect exists in two distinct states of ionization at once. A small energy difference separates these two states.

This mixed state is a "qubit," the basic element of quantum computing. In standard binary computing, a bit must be either 0 or 1, but a qubit can represent both possibilities at once. Logical operations on qubits can then perform more than one calculation at the same time.

The goal of teleportation is to transfer the state of one of the ions, call it A, onto the other, called B. This can't be done by making a direct measurement on A, because that would force it out of its superposed state into one or other of the two component states--meaning that the measurement would have destroyed any chance of knowing what superposition it was originally in. So a more subtle operation is called for.

The researchers flash very brief laser pulses at the ions, jolting them momentarily into higher energy states. Almost immediately they fall back again, each emitting a photon. These photons are also in superposed states; they're a mix of two different photons, corresponding to the mixed state of the ion they came from.

But does that mean that both photons went straight through, or that both were reflected? It's impossible to know, and the inability to tell which photon went which way constitutes an "entanglement" of their states. Because the photons themselves are in states that reflect the states of the ions they came from, the superposed states of the ions must also be entangled.

The last step to achieve teleportation is for the researchers to conduct an operation on ion A, using microwaves, that reveals partial information about its superposed state. That information is enough, however, that it can be used to determine a microwave operation on ion B that will put it in A's original state. Because this information must travel in some conventional way, teleportation does not break any rules about the impossibility of faster-than-light communication. For teleportation to work, however, it's also essential that the two ions are entangled in a strange quantum way in which actions on one can seem to have an instant effect on the other.

In their experiments, Monroe and his colleagues attempt to teleport states tens of thousands of times per second. But only about 5 times in every billion attempts do they get the simultaneous signal at the beam splitter telling them they can proceed to the final step. As a result, they achieve teleportation only about once every 12 minutes.

This low rate, says Monroe, is mostly because of the difficulty of catching the photons from the ions and sending them to the beam splitter, and because the detectors do not trigger on every photon that comes their way. If they could increase the hit rate even to once in ten thousand attempts, the technique would be potentially useful, Monroe adds. That's because the teleportation time would then be shorter than the demonstrated qubit lifetime of two seconds or more for the trapped ions, allowing quantum links to be formed over much wider networks containing many more qubits.