Taking the Pulse of the Forest 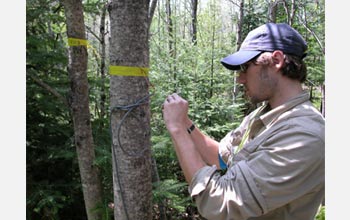 Michael Loranty wires one of many sap flow sensors in the aspen stand.

It has been nearly five years since I found myself surrounded by a cloud of mosquitoes in the middle of a wetland, in northern Wisconsin, wondering what I had gotten myself into.

This was at the beginning of my time as a graduate student, in an interdisciplinary program funded by the National Science Foundation (NSF) at the University at Buffalo, SUNY, when I was working on a research project to try and figure out how forest trees use water. Doing so was turning out to be harder than I thought.

For over a week, my advisor, Scott Mackay, and I, along with several other colleagues, had been working to set up our site. We wanted to know if trees closer to the wetland used more water than ones that were further away. To figure this out, we picked 150 trees and, by putting sensors into the tree-trunks, measured how much water each one used.

Using over 4 miles of cable, we connected the sensors in each tree to a data recorder. All of these sensors and data recorders needed power to run and so we carried 40 car batteries, weighing over 2,000 pounds, into the woods and arranged 30 solar panels in a clearing to keep the batteries charged.

Our site was in a remote area that took 45 minutes to reach by car from the research station where we stayed. This meant that we would leave early in the morning and often not return until after dark. We packed our lunches and ate in the woods, or in the car if the mosquitoes were too annoying. Luckily for us, there was a restaurant near the research station that served great cheeseburgers and fresh frozen custard. We ate there every single night.

Once the site was running and data was being collected from all of the trees, I was left on my own to take care of the site and download data. This seemed easy but there was still plenty of work to do every day. With all of the wiring, things like wind and rain could knock sensors loose or disrupt the connections.

Also, small animals like squirrels and rabbits liked to chew on cables, and bears were curious to find out what was inside these strange boxes that held batteries and data recorders. It was my job to find and repair all of these problems to keep the site running smoothly. At the end of the summer, I shut the site down for the winter and returned home to look at the data.

The data for Aspen trees, an important species in the area, showed that trees in the wetland actually used less water because they tended to be smaller. A closer look at the data revealed smaller differences over the course of one day in how much water trees used. Trees need light and water to grow, and so a tree should use the most water during the middle of the day when there is plenty of sunlight available. However, some trees actually used more water early or late in the day, and less during the middle of the day. This observation was different for each tree. One possible explanation for this is that some trees were not getting as much sunlight because they were in the shade of their taller neighbors.

I was excited to test this idea, and decided to do so the following summer. Once again, my colleagues and I returned to Wisconsin to set up the site. This time, we collected data at the same site for the first half of the summer and then moved everything to another site to measure different kinds of trees for the second half of the summer.

In addition to collecting the water-use data, I began to record the exact location and the height of the trees that were instrumented for water use, and their neighbors. To measure the height, I used an instrument that looks like a pair of binoculars and uses a laser to measure distances, called a rangefinder. At the end of the summer, I compared these measurements to the water-use data, and it appeared that trees that were shaded by their neighbors did use less water.

Because of this, I decided to return to the site for several weeks in the following summers to measure more trees. In total, I measured the location and height of over 1,500 trees.

With all of the tree-height data, I was able to use a computer model that creates a 3-D representation of the forest, and calculates how much sunlight is blocked from a tree by its neighbors. This analysis confirmed that shaded trees use less water.

The findings from this research are important because they help us to understand how a tree's environment affects how much water the tree uses. Scientists who want to make estimates of how much water a whole forest uses can benefit from this type of knowledge.

My results show that in order to make accurate estimates of how much water a forest uses, it is important to know how tree size changes throughout the forest, and how a tree's environment affects the amount of water the tree uses. Forests play an important role in the global climate system. In order to fully understand the impacts of climate change, it is necessary to know as much as possible about how forests work.

Related Websites
LiveScience.com: Behind the Scenes: Taking the Pulse of the Forest: http://www.livescience.com/culture/090307-bts-forest-pulse.html