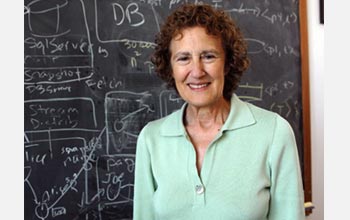 When the Association for Computing Machinery (ACM) awarded Barbara Liskov the prestigious Turing Award earlier this month, their decision and timing were perfect--Liskov is a true pioneer in her field and March is National Women's History Month. In addition to making the types of "foundational innovations" that the ACM cited in awarding the MIT professor the honor often described as the 'Nobel Prize in computing,' Liskov was also the first woman to receive a doctorate from a computer science department in the United States.

In the years since Liskov began her career, the field of computer science has seen astonishing changes and advances that have touched every field of science and modern life. Yet for all of this progress, one stubborn fact remains the same--relatively few women are studying computer science as their academic major.

According to Jan Cuny, program office for the National Science Foundation's Broadening Participation in Computing (BPC) program, fewer than one in five degrees in computer science are being awarded to women. Cuny says that research shows many girls are interested in the field when they are younger, but as they approach their middle school years, that interest begins to drop off dramatically. There are a lot of reasons for this, Cuny says, including dull middle school and high school classes that portray computer science as more of a non-challenging vocational field.

Cuny says that perhaps the biggest barrier, however, is the perception that the field itself just isn't very fun. "Girls have an image of computer scientists as being nerds who spend all day in isolation," Cuny said in a recent interview. "This is a misconception, but it's very difficult to convince a fourth- or fifth-grade girl otherwise."

Many prominent women working in the field as researchers paint a very different picture of computer science. To them, computer science offers them the chance to solve complex problems that challenge the world and contribute to discoveries and breakthroughs happening in other fields of science. They speak of the unique perspective that computer scientists bring to the pursuit of knowledge. "I think computer science is a great field," Liskov said last week. "It requires a certain kind of thinking. It's an engineering field, so you really have to enjoy building things."

Tanzeem Choudhury, a researcher at Dartmouth College, agrees. To her, computer science is a highly collaborative field where computer scientists work in teams to create new ideas and technologies. Choudhury, who was recently named one of the top 35 innovators in science and technology under the age of 35 by MIT's Technology Review, works on developing machine learning techniques that can analyze how humans interact with each other.

Choudhury agrees that there are many barriers that prevent women from getting involved in computer science. "There are lots of stereotypes," Choudhury said earlier this month, "and stereotypes take awhile to go away. Just take the notion that women aren't good at math and computer science, which is just not true."

Choudhury advises young women to ignore the stereotypes and talk to women working in computer science to get a better idea of what the field is really like and what it has to offer.

All the women interviewed agreed that more women are needed in the field. "Technology is so pervasive and is going to become more and more so," Cuny said. "Women should have a voice in how those changes are going to be made."