A Better Mass for the W Boson; Higgs Boson Given Less Space to Hide

Analyzing several years' worth of results from Fermilab's Tevatron collider, physicists come up with the most accurate measurement to date of the mass of the W boson, and narrow down the possible mass of the still undiscovered Higgs boson 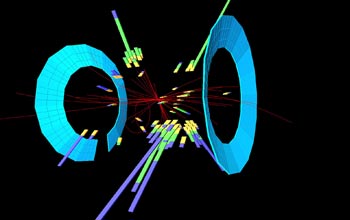 This image shows a typical outcome of the collision of a proton and an antiproton.

Over the past three decades or more, physicists have developed their experimental and theoretical understanding of the world of subatomic particles into a comprehensive theory known as the standard model. Much of the standard model has been verified and tested, but one particle--the Higgs boson--has so far escaped detection.

The Higgs boson is a crucial element in the electroweak part of the standard model, which provides a unified theoretical account of the electromagnetic interaction and the weak nuclear interaction (involved in radioactive beta decay, among other things). The W and Z bosons, also predicted by electroweak unification, were found more than 25 years ago, but final confirmation of this part of the standard model must wait for conclusive detection of the Higgs boson.

That goal has come a little nearer with two recent announcements, both the result of years of data collection and analysis, from experimental teams at the Fermi National Accelerator Laboratory in Batavia, Ill. One achievement is the most precise measurement yet of the W boson's mass. The other shrinks the mass range where the Higgs boson--if indeed it exists--must be hiding. The teams released their news at the Rencontres de Moriond, an annual particle physics meeting that ran from March 7-14, 2009, in the Italian Alps.

At Fermilab's Tevatron, protons and antiprotons speed around a circular track two kilometers in diameter, accelerated to energies close to 1 Teraelectronvolt (TeV). The beams are steered so that they cross at two places in the Tevatron ring, where vast and complex detection systems stand ready to capture and analyze the showers of fast-moving particles that erupt from proton-antiproton collisions. Physicists cannot detect the W or the Higgs boson directly. When created in a collision, each particle lives only a tiny fraction of a second before decaying into other particles--and it's certain telltale combinations of those secondary particles that scientists look for.

In experiments at DZero, one of the Tevatron's two detector stations, physicists compiled a total of 499,830 collision events, collected from 2002 to 2006, in which a W briefly appeared before decaying into an electron and an electron neutrino. Because the weakly interacting neutrino escapes unscathed from the detector, the total momentum of the detected collision debris will show an imbalance. In this case, the signature that the DZero physicists looked for is a fast-moving electron coupled with missing momentum.

To estimate the W's mass, the scientists carried out randomized computer simulations of collisions for different hypothetical values of the W mass to see what value gave the best fit to the electron energies and trajectories in the nearly half million recorded events. They conclude that the W mass is 80.401 Gigaelectronvolts (GeV), with an uncertainty of 0.044 GeV--the most accurate measurement to date. (Using Einstein's rule that E = mc2, physicists routinely measure particle masses in energy units. On this scale the proton's mass is 0.938 GeV). Adding the new result to the existing set of W mass measurements will lead to a small upward revision of the previous "world average" mass estimate, which stood at 80.399 GeV, and more significantly, will reduce the overall uncertainty in that value.

Searching for the Higgs boson is a more demanding task yet. Collisions can produce Higgs bosons in a variety of ways, and several distinct decay modes lead to a variety of experimental signatures that physicists must look for. To tackle this complex task, teams from DZero and from the Collider Detector at Fermilab (CDF), the Tevatron's other detection system, pooled data collected over many years. Computer simulations to compare the data with projected results for a given Higgs mass are also more complicated, since they have to juggle several different Higgs production and decay possibilities to settle on a "best fit" to all the experimental results.

The Fermilab experiments have not yet found a Higgs boson, but that negative result limits the mass it might have. Scientists already knew that the Higgs mass must be greater than 114 GeV, or it would have been found already. And a combination of other experimental evidence and theoretical arguments mean that the mass cannot be more 185 GeV. The DZero and CDF teams now add a further restriction, concluding that there's less than one chance in 20  that the Higgs could have a mass between 160 and 170 GeV. The Fermilab experiments were particularly sensitive in that range because a Higgs with that mass would create an experimental signature that's easier to detect.

Both teams continue to run experiments, and by the end of 2010 they should have more than doubled the number of events they have collected and analyzed so far. That amount of data should allow the scientists to extend the sensitivity of their search to the full mass range and get close to either finding the Higgs boson or beginning to suspect that it may not exist. Either conclusion would be momentous.