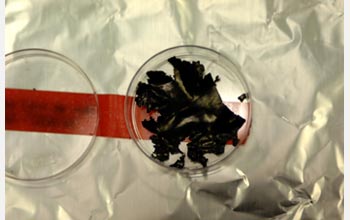 A sample of the MIT battery material that could allow quick charging of portable devices.

But they do have drawbacks, including their slow rate of energy discharge. That means they can't provide the strong power boost needed for fast acceleration of an electric car, or the quick burst of a metal drill. Now a new technology, developed with support from the National Science Foundation's (NSF) Division of Materials Research, could speed up the discharge rate of a full LFP battery to only 10 to 20 seconds.

The research took place as part of the Materials Research Science and Engineering Center (MRSEC) at the Massachusetts Institute of Technology (MIT). Gerbrand Ceder, professor of materials science and engineering at MIT, did some calculations and discovered that the cathode material in LFP batteries should be much faster at charging and discharging.

Ceder enlisted MIT graduate student Byoungwoo Kang to help figure out how to "speed up" an LFP battery's charge and discharge rate.  Their results were reported in a recent issue of the journal Nature.

"When you drive your car at 16 kilometers per hour (10 miles per hour) to go faster, you just push the accelerator," said Kang. "But if the battery can't discharge power quickly, there is no acceleration. With this new technology, you can release the power quickly for whatever you need, whether a car or any other application."

LFP batteries use electrochemical processes to store and release energy. The battery charges up from some energy source, such as an electrical outlet in a garage. Then during discharge, while the battery is in use, the stored energy travels in reverse, providing voltage to run the equipment.

The total amount of energy a battery can hold is called energy density--the higher the density, the more energy it can store.  The power density of a battery is how fast it can supply that energy to the motor or engine that it's running.

Typically, batteries have a high energy density, but a relatively low power density. This makes them the opposite of supercapacitors, which can store and discharge power quickly, but don't hold as much as a battery. That's because supercapacitors can only absorb charge-carrying ions on their surface, while battery materials like LFP can store ions inside their bulk.

"With this experiment, we tried to combine two good things: a strong power density and high energy density," said Kang. "That means we could use our material as both a battery and a supercapacitor."

A battery has three parts: a positive cathode, an electrolyte and a negative anode. "Usually the limitations on the battery come from the cathode, and in this experiment we dealt with just that," Kang said.

While an LFP battery charges, positive lithium ions flow away from the cathode, pass through the electrolyte, and collect on the anode. Then during discharge, the ions reverse direction and flow back to the cathode, where they fit themselves into "tunnels," or spaces inside the crystal structure.

The energy flowing to the motor from the battery (the electrical discharge rate) is limited by how fast the lithium ions can fit themselves back into the cathode material.

Speeding on the "beltway"

"The LFP usually moves in only one direction, like a one-way highway," said Kang. "The problem is that the highway is fast, but the tunnel is only wide enough for one ion at a time to get in. So the cars have to wait at the entrance to the highway."

To speed the ions into the tunnels, the researchers created a special coating on the LFP particles. The coating is a thin, glassy layer--only 5 nanometers thick--on the surface of each particle. This material allows the lithium ions to travel around more easily.

To create the LFP material, the researchers ground up chemicals with a specific ratio of lithium, iron and phosphorus. For this experiment, they changed the ratio of the ions somewhat from the ideal ratio for LFP.

Next, they combined the powders and heated them to 600 degrees Celsius (1,112 Fahrenheit). As the material cooled, a base of stable lithium iron phosphate crystals formed first, followed by the glassy layer coating their surface. The process had the advantage that both the crystal base structure and the surface coating formed in the same step.

According to Kang, the surface layer was like adding a beltway that allowed the ions to travel more quickly inside the cathode material. "With this new, fast lithium conductor, the cars have access from more than one direction into the tunnels," he said. "One entrance, one highway--a lot of entrances, a lot of highways."

Bringing it to market

The faster movement of the ions into the crystalline structure is reversible, Kang said, so the new technology works for both fast discharge and fast recharge.

"For the next step, we have to look at how to provide the high power you would need to recharge the battery material this fast," he said. A standard electrical outlet can't provide that much energy that quickly, according to Kang, so it would take a network of high-power charging stations, similar to gas stations, to make the new technology practical for plug-in electric vehicles.

Meanwhile, research continues in the lab. "For this experiment, we used a lot of carbon in the cathode, to assure fast charging," said Kang. "But in a real battery, that is not practical because carbon is bulky and the battery would be too large. We are now trying to reduce the amount of carbon in the electrode to 10 or 15 percent, while keeping the same performance."