Hunting for Life in Rocks Beneath the Seas 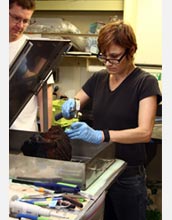 We are back again. This is our second Atlantic crossing, all to get some mud from the very middle of this ocean. I could not be happier to be right here, in the center of this great blue sea.

We are a multidisciplinary, German-American team of oceanographers, a cast of microbiologists, biogeochemists, organic geochemists, geophysicists and petrologists--all here to "survey" a tiny wedge of sediments and the underlying basement rock at 22 degrees north on the western flank of the Mid-Atlantic Ridge that is called "North Pond."

This site is just one among a little cluster of ponded sediments in the region, each flanked by 1,500-meter (4,921-foot) rocky mountains on all sides. Our survey work here has very specific objectives--to gather enough data about North Pond to plan in detail a complex expedition we are devloping with the Integrated Ocean Drilling Program (IODP), funded in large part by the National Science Foundation (NSF).

I am a geobiologist from the University of Southern California (USC), here with two other USC colleagues--Wiebke Ziebis, a biogeochemist, and a postdoc from my lab, Nina Knab. We are part of the microbiology/biogeochemistry team, here to characterize and describe life in ancient sediments and rock.

I am known as the rock woman--or iron maiden--for my interests in microbes that live in the cracks and pores of volcanic rocks at the ocean floor, my favorite among these microbes being ones that eat iron for a living.

Finding life in the crust beneath the seas

We are getting a first glimpse at what kind of life and chemical processes exist in dark, deep waters, in the ocean crust that lies under some of the most starved portions of the world's oceans--the north Atlantic gyre--where blue waters reign because of the extremely low abundance of water plants.

We will do basic surveys, figuring out what kind of microbes persist in the sediments and rock that underlay this barren ocean region. It was thought not long ago that subsurface rock and sediments were devoid of life. Now we know otherwise--life can persist kilometers below the bottom of the seas.

Calculations have suggested that if what scientists have observed in a few deep cores is representative of biology in the subsurface generally, then as much as one third of the Earth's total biomass may be buried, alive, beneath the ocean floor.

Getting to the core of the survey

For example, the global biogeochemical cycles of carbon, nitrogen, iron and sulfur--all may be influenced or controlled by these intra-terrestrial mighty microbes.

We don't know much about life in rock in the deep sea--but what we do know is that ocean water actively flows in rock below the bottom of the ocean. It is called the "superhighway" of fluids, and is the largest underground layer of water-bearing permeable rock on this planet.

The water we know is flowing, carrying tiny particles along for the ride. Microbes are among those tiny particles that must flow through, but do they take "seed"? Like biofilms that form on drinking water systems as water flows through them, clogging and making mineralized deposits that cause corrosion, I suspect, something very similar is happening in the pore spaces of volcanic rock below the bottom of the ocean--can we prove it?

Yes, we can, but not overnight.

This project is the first of its kind, and this cruise is only first step in a 10-year plan to answer these and other questions about the mighty microbes of the intra-terrestrial underworld.

Step one, collect muds--check! Step two, drill holes in rock. I cannot wait to get back here with the IODP drill ship, the Joides Resolution. Yes, indeed, we are going to be back here to "drill, baby, drill!" Mighty microbes watch out--your secrets are going to be revealed.