Nanoparticle test in mice could pave the way for human uses 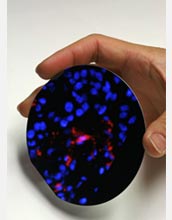 The first biodegradable fluorescent nanoparticle to safely image tumors and organs in live mice could be used for cancer detection and treatment in humans.

The research is another step towards mainstreaming the use of nanotechnology in medicine.  Many researchers say using nanomaterials for medical reasons is the health field's next major frontier. The payoff, they say, could be lower drug toxicity, lower treatment costs, more efficient drug use and better patient diagnosis.

"There are a lot of nanomaterials that have an ability to do fluorescence imaging," says Sailor, referring to a useful property that potentially could help doctors further see organs, diagnose patients and perform surgeries. "But they're generally toxic and not appropriate for putting into people."

The problem results from toxic organic or inorganic chemicals used to make the materials glow. For example, fluorescent semiconductor nanoparticles known as quantum dots can release potentially harmful heavy metals when they break down. A paramount issue in determining the efficacy of nanomaterials is the body's ability to harmlessly get rid of residual leftovers after the nanomaterial helps diagnose or treat a disease.

So Sailor's team designed a new, nontoxic quantum dot nanoparticle made from silicon wafers, the same high-purity wafers that go into the manufacture of computer chips. Researchers took the thin wafers and ran electric current through them drilling billions of pores. They then used ultrasound waves to break the wafer into bits as small as 100 nanometers.

The resulting spongy silicon particles contained nanoscale features capable of displaying quantum confinement effects, or the so-called "quantum dots." The ones in the UCSD experiment glowed a reddish color when exposed to red, blue or ultraviolet light.

"Very high doses of any substance can be harmful," says Sailor. "The important conclusion from this work is that the materials are nontoxic at the concentrations we need to use to see tumors."

The fact that their quantum dots are made from silicon is key. "A major contributing factor is the fact that these materials degrade into silicic acid, a form of silicon that is commonly present in the human body and that is needed for proper bone and tissue growth," Sailor says.

Examples where such materials should be useful include the early diagnosis and treatment of cancer. Nanoparticles that glow can reveal tumors too small to detect by other means. During surgery, they can allow the doctor to better find and remove all traces of a cancerous growth. In addition, they can enable targeted delivery of drugs and make it possible to use smaller, safer doses.

Some cancer drugs such as doxorubicin, which is used in chemotherapy, can stick to the pore walls in the new biodegradable nanomaterial and slowly escape as the silicon dissolves. When doxorubicin is delivered to the whole body in doses high enough to be effective, it often has toxic side effects, and its incorporation in the new silicon nanoparticles may provide a more effective, less dangerous way to deliver this important drug.

More needs to be done before this new material can undergo clinical trials in humans. Researchers need to further test its toxicity, how well it delivers drugs to diseased tissues, and how well it can be imaged in clinical settings.

Along with NSF, the National Cancer Institute helped fund the research.