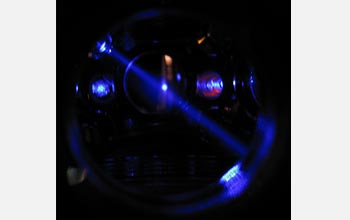 JILA's strontium optical atomic clock is now the world's most accurate clock based on neutral atoms.

To accurately measure tiny intervals of time, you need a clock that ticks very fast and very precisely. For the ultimate in accuracy, scientists reach for atoms, or more precisely, an exactly known frequency of light emitted by a chosen atom. The 'ticks' are the crests of a light wave, which rises and falls as many as a thousand trillion times per second. In an effort to improve the already remarkable precision of atomic clocks, researchers have uncovered a novel effect that can shift an atomic frequency by about one part in ten thousand trillion--and they have also figured out how to overcome it.

Atomic clocks come in various designs, but all of them work by tuning a laser to the frequency of a selected atomic transition, in which an electron hopping from one orbit to another either emits or absorbs light of a particular frequency. Jun Ye, a researcher at the National Institute of Standards and Technology and the University of Colorado, both in Boulder, and his colleagues investigated a transition between two electronic states of the element strontium 87. They used infrared laser light to create standing waves, in which the crests and troughs of the electromagnetic radiation form a stationary structure resembling a stack of pancakes spaced slightly apart from each other. These standing waves act as traps for a couple of thousand ultracold strontium atoms, just a few millionths of a degree above absolute zero, with about 30 atoms in each pancake.

The researchers then shine a red laser onto the strontium atoms, tweaking its frequency until they find the value that kicks virtually all the strontium atoms into a higher energy state. At that point, the laser's frequency exactly matches the frequency defined by the atomic transition, so that it can be used as the basis for a clock.

Trapping the atoms at ultralow temperatures keeps them almost motionless, which improves the accuracy of the clock. And it's important to prevent the atoms from colliding with each other, which would also disturb the precision with which the laser frequency can be matched to the atomic transition. To prevent collisions, scientists have turned to a fundamental rule of quantum mechanics, the Pauli exclusion principle. Particles come in two types, bosons and fermions, depending on whether they have whole units or half units of the quantum property called spin. Bosons like to gang up together, but the Pauli principle dictates that fermions in the same quantum state must stay strictly apart from each other--which means that they cannot collide.

So Ye and his colleagues chose for the basis of their clock a transition between two states of fermionic strontium atoms. By carefully preparing all the atoms in the same state they ensure that there can be no collisions between the 30 or so atoms that are trapped in the same "pancake." If a laser pulse then sends all those atoms in a precisely coordinated way into the higher-energy state, they too will be fermions that are quantum mechanically forbidden from colliding with each other.

In fact, though, the researchers detected--by comparing their clock to another precisely calibrated one--a tiny shift in the frequency of the strontium transition that depended on how closely packed together the atoms were. That dependence strongly suggested an effect due to collisions. To account for this unexpected anomaly, the team theorized that the laser did not push each atom into the higher-energy state in precisely the same way.

"Any slight difference between the way the atoms are excited means you can tell them apart," Ye explains, which means in turn that the Pauli principle is not perfectly obeyed--so that collisions are no longer impossible.

Differences between the atoms arise mainly because of a misalignment--at the level of about half a degree--between the exact axis going through the stack of "pancakes" holding trapped atoms and the laser that excites them. The resulting error in the frequency of the clock is one part in ten thousand trillion, equivalent to one second in about 300 million years. That's the kind of inaccuracy that atomic clock builders worry about.

Lowering the temperature of the trapped atoms and improving the alignment of the laser would reduce the inaccuracy, but Ye's team came up with a more ingenious fix. Their theoretical analysis showed that if the clock laser boosted the trapped atoms to nearly an equal superposition of the two energy states, the frequency error due to collisions would cancel out. To get 50 percent excitation, however, the laser frequency must be either a little above or a little below the true frequency of the atomic transition. By measuring these two frequencies and taking the average, the researchers were able to get a frequency determination accurate to one second in about 650 million years.

The accuracy achievable with optical-frequency transitions in atoms such as strontium is higher than can be achieved with older atomic clocks that were based on lower frequency microwave transitions. (The faster the ticking of the clock, the greater the precision that can be obtained.) The international definition of the second, however, is in terms of a microwave transition in the element cesium, which, Ye points out, is now intrinsically less certain than the precision that state-of-the-art optical clocks can now provide. Before long, he says, scientists will need to think about a new and more precise definition of the second.