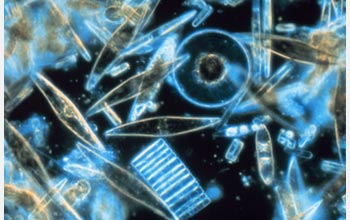 Diatoms through the microscope.

The Insight section of the May 14, 2009, issue of the journal Nature summarizes the current state of scientific knowledge on marine microbes. Entitled Microbial Oceanography, this section includes five review articles, each of which was either authored or co-authored by an NSF-funded researcher.

Microbial oceanography is a timely topic because microorganisms are "the smallest but arguably most important inhabitants of the ocean," according to the introduction to Microbial Oceanography. Nevertheless, "microbes are the life forms about which we know the least," says Mathew Kane, a program director at NSF.

The May 14 issue of Nature incorporates NSF-funded research in several important ways:

Microbial Oceanography provides an ideal resource for anyone seeking quick, comprehensive overviews of:

The following articles are featured in Microbial Oceanography: