Exploring High-temperature Superconductivity and the Pseudogap 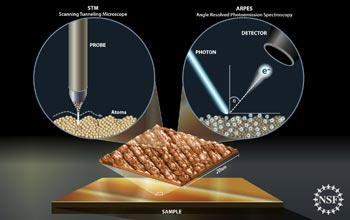 Superconductivity is a unique state in which electrons move freely inside a solid material. This complete lack of electrical resistance could translate to incredibly efficient electric power cables, as well as many other promising technologies.

But there's a hitch. Most superconductors become that way only at very low temperatures, often near absolute zero (around -273 degrees Celsius or -460 degrees Fahrenheit). To chill a material enough so that its electrons become "unglued" from their atoms, scientists must bathe it continuously in liquid helium, an expensive and cumbersome task.

In the 1980s, researchers discovered groups of materials that lose their electrical resistance at much warmer temperatures, up to around -218 C (- 360 F). Many of these "high-temperature" superconductors can be chilled with liquid nitrogen, which boils at a balmy -196 C (-321 F) and is much cheaper and easier to use than liquid helium.

But the Holy Grail of superconductivity would be a material that loses resistance at room temperature. In order to find such a prize, however, researchers need a better grasp of the way today's high-temperature superconductors work.

One group of scientists, funded by the National Science Foundation's Division of Materials Research, took a two-pronged approach to studying high-temperature superconductivity. Boston College professors Vidya Madhavan and Hong Ding, along with an international team of researchers, used both scanning tunneling microscopy (STM) and angle-resolved photo-electron spectroscopy (ARPES) to study the same material, a ceramic made with copper oxide layers. The scientists reported their results in the journal Physical Review Letters.

According to Madhavan, STM is simple in concept. "You bring the tip of a metallic wire very close to the surface of the material you're studying, and then apply a small voltage," she explained. Because the material and the wire are so close, within a few angstroms of one another, quantum mechanics comes into play.

"Even though the electrons don't have enough energy to jump between the surface and the wire, quantum mechanics says that there's a finite probability of finding an electron on the other side," Madhavan said. "This is called quantum tunneling, and we use it to conduct an electrical signal, which can be measured as current."

Therefore, electric current is sensitive to the distance between the sample and the tip. "If you have bumps caused by individual atoms, the distance changes as you scan," said Madhavan. "We can measure those changes and plot the material's topography. It's like running your finger across a rough surface."

ARPES works on the photoelectric principle. A stream of photons hits the material's surface, knocking electrons out where their energy and momentum can be measured. The researchers can use this data to calculate the momentum of electrons inside the material.

The same holds true for electrons moving around in a solid, according to Madhavan. "If you can define the direction and speed the electrons are traveling in, you know the momentum," she said.

The scientists used both STM and ARPES to study Bi 2201 (Bi2Sr2-xLaxCuO6+d), a bismuth copper oxide with some of the strontium atoms replaced by lanthanum.  They saw evidence of two distinct energy gaps in the material.

An energy gap is a range of energies electrons cannot have, following the rules of quantum mechanics. For superconductors, this gap is well-known and is directly related to the TC, the critical temperature below which the material loses resistance.

"Above TC, you normally don't expect to see another energy gap," said Madhavan. "But in some materials, you find a second gap that excludes part of the electrons--it's called a pseudogap, because it's not a complete gap." With this research, the team was trying to understand pseudogaps.

"For a long time, people imagined that you could start with the material at a high temperature, and then cool it down to the pseudogap phase," Madhavan said. "Then as you cooled it further, down to the TC, you would get into a phase where you'd see only superconductivity."

But both STM and ARPES showed signs of a pseudogap phase within the superconducting phase. "That means the two phases are somehow competing and coexisting," Madhavan said. "It's possible that the same physics that leads to the pseudogap also leads to superconductivity, in which case you can't have one without the other."

But Madhavan isn't motivated by the usefulness of her research. "Applications fall out in unexpected ways from these kinds of discoveries," she said. "When you're not looking for anything in particular, you may suddenly find a completely different way to use it.

"The reason we're so interested in understanding what is going on with these materials is a curiosity about the real world," Madhavan said. "It's beautiful once you've found out how something works in nature."