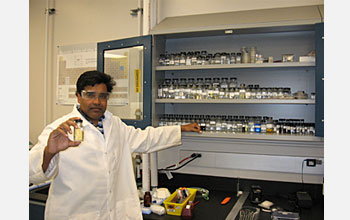 Sudipta Seal is enthralled by nanoparticles, particularly those of a rare earth metal called cerium. The particles are showing potential for a wide range of applications, from medicine to energy.

Seal is a professor of materials science and engineering at the University of Central Florida (UCF), and several years ago, he and his colleagues engineered nanoparticles of cerium oxide (CeO2), a material long used in ceramics, catalysts, and fuel cells. The novel nanocrystalline form is non-toxic and biocompatible--ideal for medical applications.

Since then, the researchers found that cerium oxide nanoparticles have two additional medical benefits: they behave like an antioxidant, protecting cells from oxidative stress, and they can be fine-tuned to potentially deliver medical treatments directly into cells.

Oxidative stress has been implicated as a cause of arthritis, heart disease, and even aging. It also plays a role in several incurable blinding diseases, such as diabetic retinopathy, age-related macular degeneration, and retinal degeneration.

Oxidative stress occurs when too many reactive oxygen species (ROS) are present. These powerful molecules are generated by exposure to ionizing radiation and by commonplace reduction--oxidation reactions within cells. (Peroxide and free radicals are two examples of ROS.)

Usually, enzymes known as antioxidants protect cells from oxidative stress by disarming ROS and minimizing their toxic effects. But sometimes, the number of ROS overwhelms a biological system, causing damage to proteins, DNA, and other cellular materials.

Seal and his colleagues--James McGinnis, a vision scientist at the University of Oklahoma Health Sciences Center, Artem Masunov, a theoretical chemist at UCF, and William Self, a molecular and micro-biologist at UCF--engineered special cerium oxide nanoparticles, which they call nanoceria, for tailored biomedical applications.

In a nanocrystalline form, cerium oxide is a powerful antioxidant because its latticework crystal structure has many vacancies that can capture oxygen, and the material has a large surface area. Self showed that nanoceria mimic the activity of superoxide dismutases (SOD), an antioxidant that can stop the deadly chain reactions caused by ROS.

Nanoceria are also able to regenerate their antioxidant abilities. "Due to this catalytic property," explains Seal, "repeated dosing with nanoceria may not be needed, as it is with certain antioxidant vitamins."

In a biological paradox, ROS are actually required for some beneficial cellular reactions. Fortunately, nanoceria do not deactivate all ROS. Rather, says Seal, "they reduce the amount of ROS to a certain low level, thus striking a perfect balance."

Because they are bombarded by light and have a very high rate of oxygen metabolism, cells in the retina encounter relatively high numbers of ROS. Seal and his colleagues hypothesized that ROS may represent an "Achilles' heel" of blinding diseases, which can be specifically targeted using cerium oxide nanoparticles.

To test their hypothesis, the researchers used mice whose eyes have retinal defects similar to those found in patients with age-related macular degeneration. They treated some of the mice with nanoceria and then compared the number of lesions that occurred in their retinas. The researchers' results, published in Nature Nanotechnology, indicate that the nanoceria prevented about 85 percent of the damage to the retina.

Seal--and colleagues Masunov, Self, Sanku Mallik of North Dakota State University, and Christopher Reilly of Virginia Tech --are also investigating the use of cerium oxide in drug delivery.

With guidance from Masunov's theoretical calculations, the researchers are optimizing nanoceria surface properties, such as charge, for greater adsorption by bioactive molecules and uptake by cells.

"This nanomaterial is very unique," explains Seal. "Its biological properties depend on how you prepare them, and there are many, many ways to do so."

While the nanoceria themselves may have some therapeutic qualities, the researchers believe it is possible to attach a drug to the nanoceria and treat only diseased cells, unlike many cancer treatments that have dangerous side-effects that harm healthy tissue as well as cancer cells.

Seal and his colleagues are continuing to investigate the chemical properties of cerium oxide and other rare earth metals and oxides, identifying and investigating various forms with potential applications in medicine and energy.

For example, cerium oxide may protect healthy cells from the damaging effects of radiation given as cancer treatments, and it shows promise for treating arthritis, wound healing, spinal cord injuries, and neurodegenerative diseases. In collaboration with researchers at Imperial College London, Seal and his colleagues are also incorporating these nanostructures into bio-scaffolds for tissue engineering and stem cell differentiation.

Because of its catalytic nature, cerium oxide nanoparticles and their hybrids may be used efficiently in methanol-ethanol conversion, in the production of hydrogen from sugarcane, for pollution control, and as an electrolyte in fuel cells. Seal is excited about extending his nanoceria research into these energy-related areas.

"We have just scratched the surface of what nanoceria can do," he says. "There are endless possibilities."