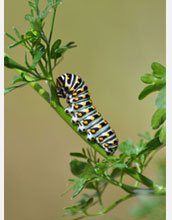 An Anise Swallowtail larva, one of the organisms that could be affected by climate change.

If it were up to Jessica Hellmann, insects such as butterflies and beetles would wield just as much conservation clout as traditional conservation icons, such as polar bears, tigers and dolphins.

"Animals such as polar bears, tigers and dolphins are tremendously important, but mostly because they help define how we think about our relationship with the natural world," says Hellmann. "But when it comes to the functioning of ecosystems, insects are where it's at."

Why are insects so ecologically important? "They carry diseases, they pollinate and they have economic impacts on crops and timber," says Hellmann, a biologist at the University of Notre Dame. In fact, almost 80 percent of the world's crop plants require pollination, and the annual value of insect-pollinated crops in the U.S. is about $20 billion. What's more, most of the multicellular living organisms on Earth are insects.

They are also particularly sensitive to climate change--as invertebrates, they can't regulate their own body temperatures--making them "great little thermometers," Hellmann adds.

On the road again

How will those "great little thermometers" respond when climate change makes their habitats too hot or too dry for them?

Most importantly, as climate change progresses, some insects may become trapped--like fish out of water--in habitats that can no longer support them. The insects may therefore go extinct or lose genetically important segments of their populations. But other species, and no one knows which ones yet, may be able to reach cooler climates by moving north on their own.

Will such mobile species be able to survive on the unfamiliar plants living in their new habitats? To help answer that question, Pelini conducted laboratory experiments that involve exposing caterpillars of two butterfly species to climates and plants that occur across their ranges, and then monitoring the growth and survival rates of these groups.

She will soon announce in the journal Proceedings of the National Academy of Sciences (PNAS) how populations of these two butterfly species that live at the edges of their ranges will be affected by climate change and the various factors that may limit or reduce their northward expansion.

Hellmann is currently following up on Pelini's research by surveying thousands of genes in the two butterfly species in order to identify the genes that are turned off or on by climate change. These studies are designed to reveal the genetic bases for the tolerance of some insect species to climate change and the intolerance of others.

But the potential of some insect, plant and animal species to survive outside of their native habitats begs the question: should endangered species whose habitats are harmed by climate change be manually moved to more accommodating habitats? Hellmann warns that this idea, called "managed relocation" or "assisted migration," remains highly controversial.

"Under some circumstances, managed relocation might be wildly successful and save a species from extinction," says Hellmann. "But under other circumstances, relocated species may overpopulate their new habitats, cause extinctions of local species or clog water pipes as invasive zebra muscles have done in the Great Lakes." Such risks have traditionally compelled most scientists to reject managed relocation.

"Ten years ago, we would have said, 'No way. Managed relocation is a stupid idea.' And that's because the best strategy is to reduce greenhouse gases. But we are not reducing greenhouse gases fast enough."

That is why a working group co-led by Hellmann and partially funded by the National Science Foundation (NSF) recently developed a new analytical tool to help decision makers determine if, when and how to relocate a particular species of plant, animal or insect based on multi-disciplinary considerations.

These considerations include the possibility of success of the relocation, its potential for causing ecological harm, relevant regulations and the cultural importance of impacted species.

David Richardson of Stellenbosch University in South Africa says that the tool, which he and other members of the working group announced in a recent PNAS article, represents "a new way to balance the risks of inaction vs. action" to help species survive climate change.

There is a difference between conducting managed relocation and introducing invasive species to new ecosystems. "If we thought that a species had the potential to become invasive, meaning it might become harmful where it was introduced, we would not want to consider that species as a candidate for managed relocation," says Hellmann. Species that are less likely to become invasive include those that are endangered or highly specialized or that we have some way of controlling.

"You just have to make sure that your managed species don't turn into invasive species. And that is the heart of the debate over managed relocation," says Hellmann.