Some common life forms, like cicadas, depend on complex symbiotic relationships with specialized microbes to produce essential nutrients 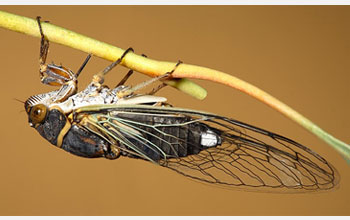 The cicada Diceroprocta semicincta feeds on a plant in Tucson, Ariz.

John McCutcheon remembers the song of the cicada--the loudest song in the insect world--as the sound track to countless summer hours spent playing outside his childhood home in Rockford, Ill.

So when McCutcheon, a molecular biologist at the University of Arizona, recently heard cicadas singing outside of his Tucson office, he again took notice--but this time as a curious scientist rather than as a playful boy.

In collaboration with his post-doctoral research advisor Nancy Moran, who has NSF support to study insects, McCutcheon began observing the relationship between cicadas and the symbiotic bacteria that live inside them.

"This project provides an example of how interesting science may be happening right outside your front door," says McCutcheon. He and Moran published their findings in the July 17, 2009, issue of PLoS Genetics.

McCutcheon admires cicadas for their success. "Certain cicada species occur in overwhelming numbers," he says. "And they are estimated to be the most abundant herbivores in terms of both their total weight and the total number of individuals in some North American forests."

But even more amazingly, cicadas achieve such success despite their reliance on a nutrient-poor diet. Most species of cicada spend most of their lives (from two to 17 years) underground before emerging en masse at regular intervals. While underground, cicadas feed solely on the sap of plant roots, which is the most nutrient-poor and unbalanced part of plants.

So how do cicadas gather the nutrients they need to survive, despite their low-nutrient diet? McCutcheon says that cicadas supplement their diet by maintaining complicated relationships with two species of specialized bacteria that live inside their cells. The bacteria produce essential nutrients for the cicadas that the animals neither receive from their sap diets nor produce themselves.

McCutcheon's study builds on Moran's previous work by characterizing the complete genome of one of the bacterial species living inside cicadas. His results revealed that these bacteria have extreme and unique features.

For one thing, this organism has the smallest bacterial genome known to science. In other words, it has less genetic material than any other cellular organism that has thus far been identified.

What's more, the genome of the cicada bacteria has a high average content of guanine and cytosine--two of the four chemical bases of DNA. This finding is surprising because scientists previously thought that the smaller a bacterial genome is, the less guanine and cytosine is usually present in its DNA.

"We don't yet understand the significance of this exception," says McCutcheon. "But it goes against everything we thought we understood about the relationship between bacterial genome size and guanine and cytosine contents."

In addition, the genetic code that the bacteria use to produce proteins is atypical. Other genetic codes with similar atypical features have been found in certain bacteria and mitochondria--all of which have small genomes and the expected low concentrations of guanine and cytosine.

Therefore, McCutcheon's findings show that reductions in guanine and cytosine content are not necessarily a requirement for the atypical coding, or the cause of it.

The researchers believe their new findings suggest common life forms, like cicadas, can depend on complex symbiotic relationships with specialized, extreme microbes.

"Such symbionts are one aspect of the underexplored microbial world," says McCutcheon, "a world which contains unusual life forms that are only now being discovered."