West Nile Virus: The Search for Answers in Chicago’s Suburbs 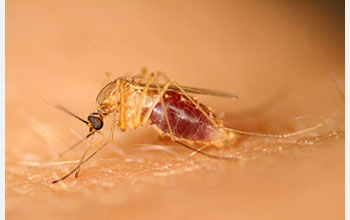 The southwest suburbs of Chicago may hold the secret to understanding West Nile virus, a pathogen that has infected thousands since it appeared in North America in 1999.

"There are few other cities with such good conditions for the virus to persist," explained Tony Goldberg, epidemiologist and professor at the University of Wisconsin-Madison's School of Veterinary Medicine.

In a study funded by the National Science Foundation and the National Institutes of Health through their joint program in Ecology of Infectious Disease, Goldberg and his team are exploring the ecological factors that contribute to West Nile transmission, including the Chicago suburban environment, and bird and mosquito movement.

According to Goldberg, studying West Nile is crucial to understanding the development and spread of disease in today's world. West Nile is "a textbook example of globalization of disease," said Goldberg who described how it has emerged throughout Europe, the Middle East and now the Americas over the past 80 years.

Despite previous international cases, Goldberg explained that West Nile most likely spread to North American by humans or mosquitoes. Once the virus arrived in North America it encountered birds with no resistance to the disease, allowing rapid infection.

Mosquitoes catch the virus by feeding on infected birds. Infected mosquitoes proceed to spread the virus to humans through their bites. Ultimately, humans run the risk of developing potentially fatal encephalitis or meningitis.

While various bird species may carry the disease, the American robin in particular appears to be a key host.  Young, recently fledged robins appear to be more important for the sustained transmission of the virus than other birds, such as crows and jays that often die shortly after infection.

Why is this phenomenon more prevalent in the Chicago suburbs? Goldberg explained that the answer lies in the "suitability of this type of environment for mosquito breeding and transmission to key avian species, especially the American robin."

According to Goldberg, the coinciding timing of mosquito breeding and robin breeding creates ideal conditions for this host and parasite relationship to flourish. "For any vector-borne disease, the insect vector and an appropriate host must come together at the same time and place," said Goldberg.

To determine why certain neighborhoods have higher numbers of West Nile cases, Goldberg's team of students, post-doctoral researchers, and collaborators from the University of Illinois, Michigan State University and Emory University, are tracking robin movement using radio-transmitters to search for their nighttime roosts.

Climate, weather data and local patterns of vegetation are also being recorded to isolate contributing factors.  Goldberg explained that storm drains filled with organic materials and standing water are an ideal breeding ground for Culex mosquitoes, which carry West Nile virus. With heavy rainfall, these storm drains are washed out, along with the mosquito larvae, but when there is little rainfall and temperatures are hot, the larvae are left undisturbed to grow, pupate, and hatch into adults. Goldberg noted that one can predict the severity of West Nile based on the amount of rainfall at key times of year--in some cases, paradoxically, the more rainfall, the less number of West Nile cases.

The results of these studies will help researchers understand the relationship between West Nile and other worldwide diseases spread by mosquitoes that may potentially enter the United States in an age where "globalization of disease" is a growing reality. Diseases such as dengue or "breakbone fever" and Chickungunya are two examples of possible candidates.

According to the Center for Disease Control and Prevention (CDC), dengue infections have been reported in more than 100 countries and in 2005, its global distribution was comparable to that of malaria, with an estimated 2.5 billion people living in areas at risk for epidemic transmission. CDC also reports that Chickungunya has been cited as the cause of numerous human epidemics since it was first isolated in 1953.

Plans for additional research will track mosquito movement across suburban environments using chemical isotopes in insects that identify their hatching location. Goldberg will also continue to study bird-mosquito dynamics and the evolution of the virus itself.