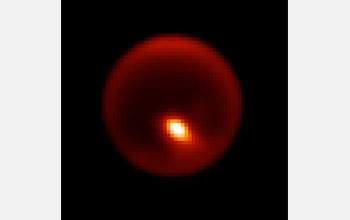 On Titan, Saturn's largest moon, methane clouds drift through a dense, nitrogen-rich atmosphere, clustering mainly in the polar regions. Methane lakes dot Titan's surface, also at high latitudes. Closer to the moon's equator, by contrast, clouds appear rarely if at all, and the surface seems arid. But in January 2005, the Huygens probe, after detaching from the Cassini spacecraft and descending through Titan's atmosphere, gave planetary scientists their first close-up view of the moon's surface. Huygens imaged small channels and river beds at low latitudes, in regions that scientists had assumed to be devoid of flowing liquids that could carve such features. Now, astronomers working at Earth-based telescopes have for the first time observed, near Titan's equator, large and persistent clouds that might be capable of raining liquid methane onto the surface.

Titan's equatorial plane is tilted at about 27 degrees from the plane of the solar system. That creates seasons, as the apparent position of the sun in Titan's sky ranges from 27 degrees north of its equator to 27 degrees south during the course of Saturn's 30-year orbit. Using adaptations of the computer models used to study Earth's climate, planetary scientists have found that clouds are most likely to form predominantly at Titan's poles during polar summers, when the sun is high in the sky in those regions. Only at those times, the models suggest, is the sun's heat enough to drive atmospheric convections that will send methane-laden "air" upward, where the methane will cool and condense to produce clouds.

That predicted pattern is broadly consistent with observations to date, which indicate that clouds on Titan are generally sparse, typically covering less than 1 percent of the moon's visible surface area, and concentrated toward the poles. But in September 1995, and October 2004, cloud coverage rose as high as 7 percent for periods of up to a month, episodes that may have produced significant amounts of methane rain. To better understand these sporadic events, Emily Schaller of the University of Hawaii and her colleagues at the Lowell Observatory in Flagstaff, Ariz., and the California Institute of Technology began a project to regularly monitor cloud coverage on Titan.

At visible wavelengths, Titan's hazy atmosphere--whose surface pressure is about one and half times that of Earth's--gives it a fuzzy, opaque appearance. At certain infrared wavelengths, however, the atmosphere is transparent while methane clouds are highly reflective. Schaller and her colleagues used NASA's Infrared Telescope Facility (IRTF), situated on Hawaii's Mauna Kea, to check Titan's infrared brightness as many nights as they could. IRTF measures the brightness of Titan as a whole, so when it revealed an increase in infrared reflectivity, the team turned to another telescope, Gemini North, to see where on Titan that infrared light was coming from. Gemini North, also on Mauna Kea, is one of a pair of 8-meter infrared telescopes funded in part by the National Science Foundation; its twin is Gemini South in the Chilean Andes. The Gemini telescopes achieve high resolution through the use of adaptive optics, meaning that the shape of their mirrors can be rapidly tweaked to overcome the blurring of images that results from light passing through the Earth's turbulent atmosphere.

In just over two years, the Titan monitoring program acquired 138 nights of observations, and on April 13, 2008, Schaller says, the effort finally paid off. After IRTF reported brightening of the moon, observations by Gemini North revealed cloud cover extending across the moon's middle latitudes, from 14 degrees south to 44 degrees south. Over the next few days, this large cloud spread southward, until on April 17, Titan's rotation took it out of view from Earth. The following day clouds appeared at even lower latitudes, from 20 degrees south to 12 degrees south--closer to the equator than clouds had ever been seen before. Clouds also appeared in the polar regions. A similar pattern recurred about a week later, as the large mid-latitude cloud rotated back into view again.

Schaller and her colleagues offer a theoretical argument indicating that the initial mid-latitude cloud formation could have triggered the formation of clouds in both the polar and equatorial regions via large-scale atmospheric waves. Such waves occur in Earth's atmosphere and are known to propagate weather systems around the globe.

The equatorial clouds seem substantial enough, the astronomers say in the August 13 issue of Nature, to produce methane rains that could, from time to time, create and shape the channels and apparent riverbeds imaged by Huygens. What remains puzzling, though, is why the mid-latitude cloud formed in the first place. Some surface features on Titan hint at the occurrence of "cryovolcanism," in which water-ice melts and flows, perhaps also releasing methane that was trapped in the frozen surface. Rising heat and freed methane could both lead to the formation of clouds. But observations from Cassini show that the surface of Titan above which the mid-latitude cloud formed "seems completely unremarkable," Schaller says. It's possible, she adds, that a convergence of purely atmospheric phenomena could have brought the initial cloud into being.

Regardless of their origin, the possibility that clouds can form sporadically at almost all latitudes of Titan suggests that closer examination of its surface will reveal an abundance of features created by flows of liquid methane, Schaller says.