Scientists adapt a weather research and forecasting tool to model global weather on the Earth, Mars and beyond 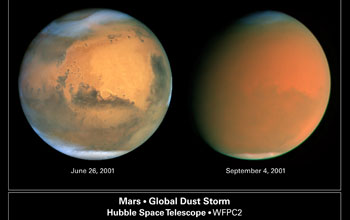 Maybe even more than average citizens, the world's space agencies rely on daily and seasonal reports to better understand weather on Earth and other planets. Space-mission success ties directly to effective anticipation and navigation of inclement surface and atmospheric conditions.

Mission-design engineers at NASA, the European Space Agency (ESA) and similar organizations need to know what environmental issues a Mars Lander or Rover might face to ensure that heat shields, parachutes and other on-board mechanisms survive the trip through the atmosphere to the surface.

In certain cases, even orbiting satellites that normally fly unscathed by planetary weather benefit from a clear understanding of a planet's atmospheric conditions.

For instance, part of the ESA Cassini-Huygens mission included sending a probe to Titan (one of Saturn's moons) to collect environmental data during its descent toward the lunar surface in December 2004-January 2005.

"When it comes to flying spacecraft, weather matters--especially at the surface" said Mark Richardson, a planetary physics and atmospheres expert and research scientist at Ashima Research.

Environmental information is also essential for real-time entry, descent and landing operations on missions to a planet like Mars, or to Titan, explains Greg Lawson, a research scientist at the California Institute of Technology (Caltech).

"Mission planners want to know about both the mean state of the environment and how it might vary--and to do this, they have to know about the meteorology," Lawson said.

Planetary scientists could generate the required information using results from a number of different models, but ideally, they want a single, unified model to study atmospheric and surface-atmosphere dynamics from a variety of perspectives--from global to regional and local.

In the early 2000s, the National Center for Atmospheric Research (NCAR) released its Weather Research and Forecasting (WRF) model. Richardson recognized that, with some modifications, WRF might be the perfect tool to model extraterrestrial planetary weather and climate.

"WRF offered the possibility of a single framework, as well as cool nesting capabilities and the ability to reconfigure the grid to model both small- and large-scale atmospheric phenomena," Richardson said.

WRF lacked the ability to run as a full, global General Circulation Model but, by transforming the gridding system, Richardson and colleagues at Cornell University, Ashima Research, the Jet Propulsion Laboratory/Caltech and Kobe University in Japan revised WRF to run on global and regional scales. The effort resulted in planetWRF.

Designed as a community tool, WRF users share enhancements with their peers, and planetWRF embraces this community model spirit. With release of WRF 3.0 in 2008, planetWRF developers offered fellow modelers the option of using a global grid--an addition valued by the scientific community.

"planetWRF improves understanding of planetary dynamics and applied meteorology, both on other planets and on Earth, which scientists can use to shed light on their own studies and space agencies can use for mission preparation," Richardson said. "In creating planetWRF, we wanted to make sure to carry on the WRF team's example of cross-collaboration, by providing a new capability to other weather modelers."