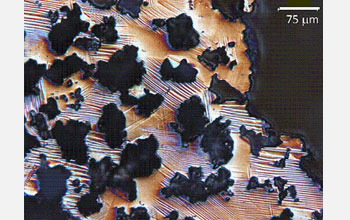 Porous metallic foams are made in a two-step process.

By chance, two friends, out of the 3,000 scientists attending the fall 2006 Materials Research Society meeting in Boston, ran into each other outside the Hynes Convention Center. Peter Müllner and David Dunand had both graduated from the Swiss Federal Institute of Technology (ETH) Zurich.

Müllner, now at Boise State University, was researching magnetic alloys that can change their shape in the presence of a magnetic field. Meanwhile, Dunand, at Northwestern University in Chicago, had developed an expertise in metallic foams--light-weight porous materials that sometimes resemble a sponge--in particular shape-memory alloy foams that change their shape when temperature is changed.

"David was in a hurry to catch his plane," remembers Müllner. "But we took a couple of minutes to talk about our current work. David asked the question, ‘What do you think would happen if we made foam out of your magnetic shape-memory alloy?' I answered that it might actually solve the problem of polycrystals."

Magnetic shape-memory alloys, or MSMAs, are solid crystals made up of a combination of materials that react to magnetic fields by either stretching out or contracting, not unlike a muscle. These materials are useful for all sorts of applications where a mechanical switch must be controlled by an electrical signal, and vice versa.

The amount of stretch or shrink exhibited by these alloys is called the magnetic field-induced strain (MFIS). So, for example, with a 10 percent MFIS, a one-foot-long rod might grow or shrink by more than an inch. In some alloys, once the magnetic field is removed, the material comes back to its original shape; in others, the field must be inverted.

The MFIS of an alloy depends on how the atoms crystallize as the hot molten material cools and solidifies. There are two basic kinds of crystals-monocrystals, which resemble large gem stones, and polycrystals, which contain millions or even billions of small "crystallites," called grains.

"The atoms in a monocrystal are organized into strictly periodic patterns, something like tiles laid in the same pattern over the floors of an entire house," Müllner explained.

"In a polycrystal, the orientation of the pattern of atoms changes from one location to another, with grain boundaries forming lines or planes between crystallites," he said. "Picture the same type of tile installed throughout an entire house, but this time the pattern in each room is oriented differently, with seams running in different directions."

Monocrystals cost more and take much longer to make than polycrystals. "When casting polycrystals, the alloy needs to be held only for a few minutes at very high temperatures (above 1,100 degrees Celsius or 2,000 degrees Fahrenheit)," Müllner said. "But monocrystals must be kept at such extreme temperatures for days, which takes an enormous amount of electrical power."

According to Müllner, all alloys made by conventional processes, such as casting and forging, are polycrystals, which leads to a problem: Polycrystalline MSMAs do not react to magnetic fields to the same degree as monocrystals.

But with Dunand's comment, Müllner realized that it might be possible to create a polycrystalline material with a larger MFIS by first turning it into metallic foam.

The term "metallic foam" seems like an oxymoron. But metal alloys cast with either gas-filled pockets, or open pores are being considered for applications, such as airplanes, which require strength plus light weight.

According to Dunand, porous metallic foams are made in a two-step process. First, the researchers create a place-holder by heating a ceramic powder until it forms a stiff body with lots of open pores. Then they cast a liquid metal alloy right into the pores. After the alloy solidifies into crystalline form, the ceramic form is leached away with an acidic solution, leaving a framework of thin metal struts resembling a sponge.

After creating the foam, the scientists must "train" it to perform its magnetic tricks. "We repeatedly apply a magnetic field and a mechanical load as we heat and cool the material," Müllner said. "As a result, the material begins to deform more and more easily and to larger amounts. During this process the internal microstructure of the material changes, which means that the number, orientation, and mobility of special grain boundaries--so called ‘twin boundaries'--change."

Dunand and Müllner decided to collaborate on the problem, beginning with foam made from Ni-Mn-Ga, an alloy of nickel, manganese, and gallium. "Three months later, we had the first results," said Dunand. "That led to a patent, a National Science Foundation funding award, and a paper published in Physical Review Letters."

But the amount of strain that the foam exhibited was still relatively small. For the next phase of their research, they decided to make the foam with two different pore sizes, including some about the size of the crystallite grains, and some smaller than grain size. "For producing foam with both large and small pores, we mixed two ceramic powders to create a corresponding place holder ceramic form," Dunand said.

The results, published in the journal Nature Materials, were better than the researchers could have hoped for.  With the single-sized pores, they had achieved an MFIS of only 0.12 percent, equal to a rod one foot long stretching about one-hundredth of an inch. But with the two different pore sizes, the MFIS increased to anywhere from 2.0 to 8.7 percent, which would be like the same rod stretching one-quarter inch to an inch.

Shape-memory alloys have been used in sensors and mechanical controllers of all kinds. However, there are no commercial devices using foam MSMAs on the market yet, according to Dunand.

"I could imagine that magnetic refrigeration might become the first technological application of magnetic shape-memory foam," said Dunand. "When the foam becomes magnetized, it heats up. Conversely, when it is demagnetized, it cools down."

"The many pores in our foam provide a large surface area, which will accelerate heat exchange and thereby improve the efficiency," Dunand said. "And because magnetic energy can easily be produced with electrical power, this makes the foam attractive for green refrigeration technology."

Other members of the research team included Markus Chmielus and C. Witherspoon, of Boise State University, and X.X. Zhang, of Northwestern University.