With Help from a Bacterium, Cockroaches Develop Way to Store Excess Uric Acid 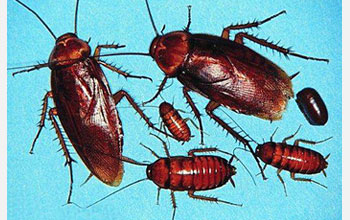 Cockroaches, the banes of bathtub drains, have an unusual way of using waste products.

What life form can use materials as nutrients that we, and most other animals, would consider waste products?

None other than the giant cockroaches that infest sewer systems and erupt from people's bathtub drains, according to scientists Nancy Moran and Zakee Sabree of the University of Arizona, and Srinivas Kambhampati of Kansas State University.

The researchers published their results in last week's issue of the journal Proceedings of the National Academy of Sciences (PNAS).

Uric acid and urea are nitrogenous waste products not useful to animals as food. But by teaming up with a bacterium, cockroaches can use them as sources for making their own proteins.

"It's an example of a symbiosis," says Moran, "that allows a whole new way of life."

One day, it might help us better understand how animals successfully store excess uric acid, a problem in human kidney disease and other diseases.

Insects are the most abundant and diverse animals on Earth, says Matt Kane, program director in the National Science Foundation (NSF)'s division of environmental biology, which funded the research.

"Through genome sequencing like that used in this study," says Kane, "we're increasingly finding that this success can be attributed to the relationships insects have forged with microorganisms."

Cockroaches are one of the most widely recognized insects. "While the common response to the mention of these creatures is revulsion," says Moran, "their maligned reputation is largely due to the actions of a few cockroach species."

Fewer than one percent of known cockroaches has any association with humans.

The American cockroach (Periplaneta americana), however, is a common pest that happily resides in the shadows of human life.

Like many cockroaches, P. americana is primarily herbivorous and feeds on decaying plant matter. But it can also be an opportunistic carnivore that feeds on dead animals and animal wastes.

"Having enough nitrogen in their diets is a primary requirement for cockroaches," says Moran. "While many insects excrete waste nitrogen in the form of uric acid, instead cockroaches internally store it that way."

Cockroaches can take advantage of nitrogen windfalls by stockpiling nitrogen in uric acid, then drawing upon these reserves when other sources of nitrogen are lacking.

The scientists observed uric acid stored in cockroaches' bodies. A bacterial endosymbiont, or partner, was also seen residing within specialized cells, called bacteriocytes, in the cockroaches.

Named Blattabacterium, this bacterial endosymbiont was observed not only in the American cockroach, but in various other cockroach species.

"We estimate that it's been associated with cockroaches for more than 140 million years," says Sabree.

"Its role is likely two-fold: providing nutrients and, given its close proximity to uric acids in the host insect's bodies, degradation of uric acid so levels don't get too high and kill the cockroaches."

Moran, Sabree and colleagues sequenced the genome of the P. americana-associated Blattabacterium species, hoping to better understand the nature of this insect-bacterial relationship. They found that the bacterium is capable of producing all essential amino acids, many non-essential amino acids, and various vitamins.

Surprisingly, no genes known to encode enzymes involved in degradation of uric acid were found in the bacterium's genome, but it can use urea and ammonia, both uric acid degradation products, to generate nutrients.

Blattabacterium can recycle waste nitrogen, "but it's still unclear what exact role it plays in degrading uric acid," says Moran.

"However," she says, "for eons, it likely has allowed cockroaches to subsist on nitrogen-poor diets and to exploit nitrogenous wastes, capabilities that are critical to the ecological range and global distribution of cockroach species."