Sandra Olsen of the Carnegie Museum of Natural History describes how she and her colleagues, with support from NSF, discovered evidence of the early beginnings of horse domestication in Kazakhstan 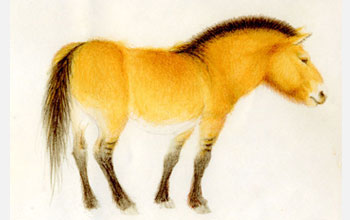 Reconstruction of the tarpan, or wild European horse, Equus ferus.

Paleolithic hunters in Europe and Asia began exploiting horses for meat thousands of years ago, yet the origin of horse domestication long has eluded archaeologists--for some captivating reasons.

One of the biggest reasons is that for many centuries, horse skeletons did not significantly differ in size or physical structure from those of their wild ancestors, making early taming and use of the animal more difficult to identify.

But as part of an international team of archaeologists, my colleagues and I may be getting closer to the beginnings as we look for clues in Kazakhstan.

Our team conducted extensive research at three sites belonging to the Botai culture in the northern part of the country, at locations dated to the Copper Age around 3,500 B.C.

We selected the region because it was here in the heart of the Eurasian steppe where the tarpan, a small wild horse, thrived after they had vanished from most parts of the world. It was estimated that the tarpan lived successfully in the area through most of the Holocene, beginning about 11,700 years ago, before going extinct in the early 20th century.

Upon examining the sites, we found evidence that could point to the early phases of horse domestication and help explain its initial impacts on society. We found that early domesticated horses were eaten, milked and ridden.

More than 90 percent of the animal bones from the main site of Botai, a vast collection estimated at around 300,000, were from horses. Stone-tool butchering marks on the bones indicated a community whose diet consisted primarily of horsemeat. In addition, there was evidence that horses were sacrificed for religious purposes.

Some of the most common artifacts in all Botai settlements are tools made from horse mandibles that were used to prepare rawhide thongs necessary for equipment such as bridles, hobbles and whips. This supported the idea that the Botai horses were ridden.

To me, the most compelling evidence that the Botai kept horses was the fact that they suddenly appeared in large, permanent settlements.

The main site of Botai had over 160 houses, which raises a question: If the people were still just pedestrian hunters with no form of livestock or agriculture, how could they sustain large communities for years without soon depleting the wild horses? And why would they focus so heavily on just one species of large game?

Still, this array of evidence was not sufficient to convince many scholars that the Botai were some of the earliest horse herders in the world, so we kept searching for more definitive proof.

With the assistance of geologists Michael Rosenmeier and Rosemary Capo, we collected soil samples from inside suspected corrals. The samples contained high levels of phosphorus and sodium, as well as traces of lipids that signal the presence of manure. Corrals would have been essential for keeping herds of horses on the open steppe.

Finally, after more than a decade of research, our team discovered residues of mare's milk in pottery. One of our team members, Alan Outram, collected modern samples of horsemeat and milk from Kazakhstan for comparison and brought some of our potsherds to Richard Evershed and Natalie Stear, at Bristol University, for biochemical analysis.

Lipids in the sherds signaled the presence of either horsemeat or milk, but only after years of research did these dedicated chemists discover that a deuterium (hydrogen isotope) marker indicated that the fats from horses in some sherds were collected during the summer--the main season when mare's milk is available.

With the identification of this by-product of domestication, we have compelling evidence that the Botai were indeed horse herders, since milking wild mares would be incredibly difficult.

Finding these early beginnings of modern horse domestication was akin to discovering a watershed moment. Few would dispute the fact that horse domestication was pivotal in human history. Since horses were first domesticated, their cultural value has grown and their roles diversified to include transportation, herding, haulage, plowing, dairy production, warfare, sports and many other functions.

Moreover, no other animal has had such a tremendous impact on geopolitics, chiefly through the successes of imperial cavalries, and no other beast has had so many occupations. Horse domestication certainly has changed the course of human culture as we know it.